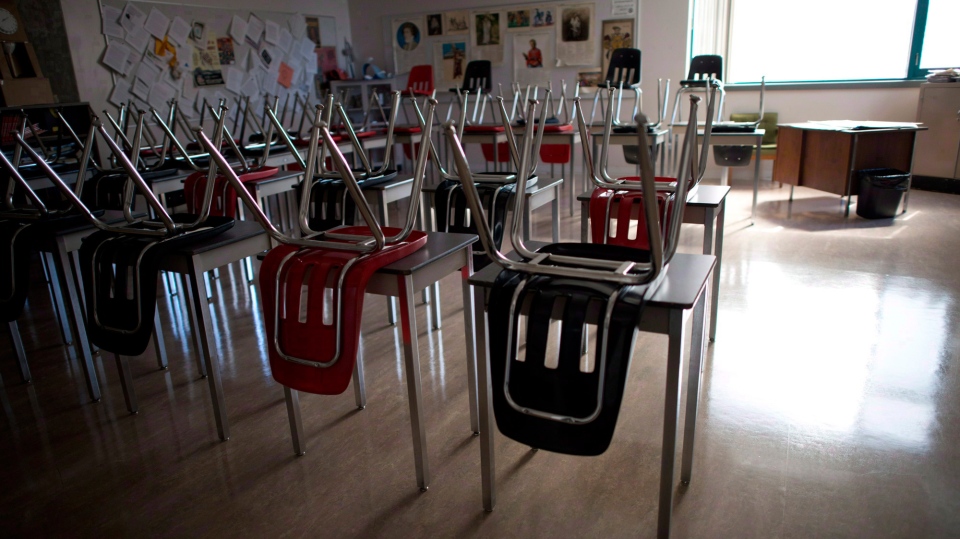 TORONTO — Ontario’s English Catholic teachers will hold a one-day strike next week that will affect elementary and secondary schools, the union representing teachers in that system said Monday as talks with the province appeared to have stalled.

The president of the Ontario English Catholic Teachers’ Association said the union’s 45,000 members will walk off the job on Tuesday, Jan. 21, after negotiations with the government broke off last week and no new dates have been scheduled.

Liz Stuart said the government appears to only “do the right thing” when it is under pressure, so teachers have little choice but to take the next step in the bargaining process.

“We have not taken this decision lightly,” she said. “It should go without saying that teachers would rather be in the classroom with our students. We also appreciate the difficulties that strike action present for parents and guardians.”https://platform.twitter.com/embed/index.html?creatorScreenName=CTVToronto&dnt=false&embedId=twitter-widget-0&frame=false&hideCard=false&hideThread=false&id=1216796674544295941&lang=en&origin=https%3A%2F%2Ftoronto.ctvnews.ca%2Fontario-s-english-catholic-teachers-announce-one-day-strike-next-week-1.4764453&siteScreenName=CTVToronto&theme=light&widgetsVersion=ed20a2b%3A1601588405575&width=550px

Stuart announced the latest job action the same day the union, known as OECTA, started a work-to-rule campaign that included not participating in standardized testing, preparing report cards or participating in Ministry of Education initiatives.

The latest round of talks with Premier Doug Ford’s government broke down last week after just two hours, the union said. Stuart said the province’s team has shown no willingness to budge on key issues such as mandatory e-learning or class sizes, or make any pledge to maintain full-day kindergarten.

“The reality is, teachers are the last line of defence when it comes to stopping this government’s reckless education agenda,” she said. “We will not stand by and let this government continue on a path that will have such devastating long-term consequences for our students and our schools.”

Meanwhile, public elementary teachers stepped up their work-to-rule campaign on Monday and are planning for rotating strikes starting next week, while public high school teachers are set to stage the latest in a series of one-day, rotating strikes on Wednesday.

The Elementary Teachers’ Federation of Ontario is planning rotating strikes starting Jan. 20 unless there is significant progress in contract talks.

The Ontario Secondary School Teachers’ Federation has staged a series of rotating strikes and have also been on a work-to-rule campaign since November.

Education Minister Stephen Lecce said Saturday that teachers in the French system have also announced a work-to-rule campaign, but the union would only say it will talk about the next steps in the bargaining process at a press conference on Tuesday.

All of Ontario’s major teachers’ unions have expressed frustration with a lack of progress in talks with the government. They have been without contracts since Aug. 31.

On Monday, Lecce said teachers’ unions must stop further escalation, which he said is hurting students.

“We’ve seen this story before,” he said. “I really hope the teachers’ unions will better reflect on a pathway forward that is constructive (and) that does not adversely impact learning for students.”