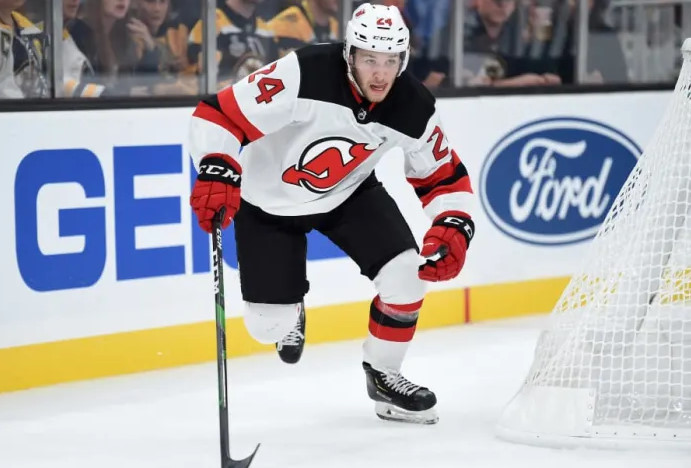 The new-school puckmover won the award for the second year in a row and his next challenge will come in the pros. Smith is one of several building blocks the Devils will be counting on in the coming years.

It’s awards season in major junior, as all three circuits have steadily announced their winners due to the cancellation of the 2019-20 campaign. The latest WHL player to be honored is Spokane’s Ty Smith, who won his second consecutive Bill Hunter Memorial Trophy as defenseman of the year. In doing so, Smith became just the third repeat winner of the award, joining future NHLers Kris Russell and Dion Phaneuf.

Beating out a solid runner-up in Calen Addison (MIN), Smith posted 59 points in 46 games for the Chiefs, giving him one of the best point-per-game marks in the league for a defenseman and landing him amongst the top blueliners in gross points overall. On top of that, Smith helped Team Canada win gold at the world juniors in the Czech Republic.

A New Jersey Devils prospect who was taken 17th overall in the 2018 draft, Smith is a new-school defenseman with great mobility and puck skills. For a Devils franchise in the midst of a rebuild, he’s exactly the sort of player that will help New Jersey improve in the coming years.

Smith got a long look from New Jersey this past fall, but was ultimately sent back to junior for one final campaign.

As great a prospect as Smith is, getting that pre-season experience allowed the youngster to see what the next level will hold for him: He needed to make quicker decisions and move the puck faster than he did in junior.

Whenever next season begins, Smith will get his shot at an NHL job. And Devils fans should be excited for his progression. New Jersey traded away one puckmover at the deadline in Sami Vatanen and while the team still has P.K. Subban, Connor Carrick and Will Butcher under contract, it’s important to look at the long-term in Newark, because that’s where this team will make its bones – not in the short-term.

Jack Hughes, for example, learned some tremendous lessons about the speed of the NHL in his first season and he will undoubtedly adjust accordingly in the near future. Nico Hischier has already established himself as a young star and the best is yet to come there. In Mackenzie Blackwood, New Jersey has a very good option to lead the franchise in net.

While I don’t necessarily see Smith as being on the same dynamic level as Cale Makar or Quinn Hughes, I still see a very promising player who will delight in getting pucks up to what should evolve into a nice crop of forwards in the coming years. Keep in mind, New Jersey has four first-rounders in the next two drafts, possibly three this year (depending on conditional deals with Arizona and Vancouver. I think they get at least one of those picks this year).

Given that the Devils’ own selection will be fairly high, New Jersey should get a very nice pick in what promises to be a stacked first-half of the draft.

While it is undoubtedly painful for the team’s fan base to sit through another non-playoff year in 2020-21, I could certainly see that happening, but there will at least be improvement. With players such as Smith learning as they grow, this franchise should turn a corner soon after.