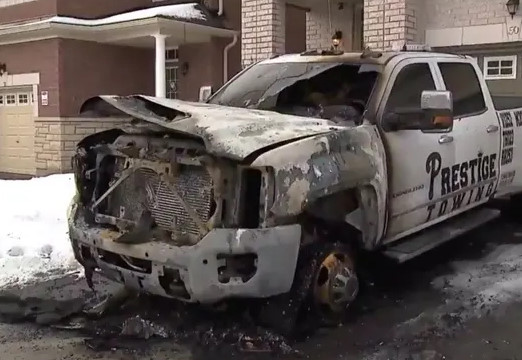 Police in Canada have arrested 20 people and brought hundreds of charges – including first-degree murder – in their latest attempt to disrupt violent turf wars between rival tow-truck operators.

York regional police, which oversees a region north of Toronto, announced the arrests on Tuesday as part of an investigation dubbed Project Platinum.

“We allege that the competition for control of the tow market has resulted in murders, attempted murders, shootings, assaults, arsons, threats and property damage,” said the superintendent, Mike Slack, in a video announcing the arrests.

In recent months, concerns have mounted that the tow truck industry in the greater Toronto area has become a hotbed for organized crime looking to profit from lax regulation.

As part of their investigation, police say a number of towing companies colluded with repair shops, physiotherapy clinics and car rental companies to “grossly inflate” bills, with each group taking a slice of the illicit profits. They also allege that companies were “deliberately causing collisions” in order to generate profits.

Project Platinum began in February as a joint operation between a number of Ontario police forces and the Canada revenue agency, and has resulted in the seizure of cash, fentanyl, cocaine, all totalling $1.5m CAD. Police also confiscated 40 firearms, including handguns, rifles, shotguns – and a machine gun – in their attempt to dismantle four criminal organizations.

Project Platinum also produced two first-degree murder charges in the death of tow truck driver Soheil Rafipour, who was shot dead outside his home in December 2018.

The raid comes nearly a year after another major police operation targeting the tow truck industry, dubbed Project Kraken. More than 70 people – including seven drivers – were charged with offences ranging from firearms possession to conspiracy to commit murder.

In that operation, police recovered Tasers and body armour, and found that numerous drivers were armed and “prepared to shoot other tow-truck operators”, Toronto’s police deputy chief James Ramer said at the time.

Following Tuesday’s raid, Slack said he expects “the extreme level of violence we have seen in our community” to diminish in the coming weeks and said the investigation could produce more arrests.