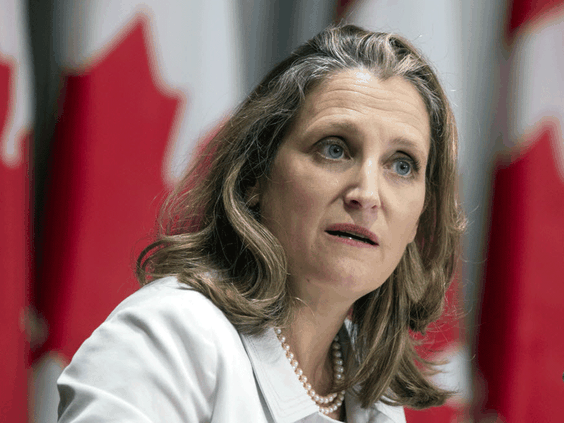 OTTAWA — Perrin Beatty was on his way home from the office when his phone rang. It was Chrystia Freeland, who 24 hours earlier had become Canada’s finance minister.

For the president of the Canadian Chamber of Commerce, the call signalled how Freeland will approach her new portfolio — reaching out to multiple stakeholders and listening to ideas before embarking on a path forward.
“She’s hard-working. She’s accessible. She’s pragmatic,” Beatty said.

As much as some might see her as a change from Bill Morneau, who abruptly resigned Monday, there was no hint of a major shift in her earliest hours in the job.

When she spoke to reporters on Tuesday for the first time as finance minister, Freeland talked about going green, as well as equitable and inclusive growth.

Elliot Hughes, a former Morneau adviser now at Summa Strategies, said this suggests the Liberals plan to double down on their existing approach.
It was also in line with thoughts Freeland laid out in her 2012 book, Plutocrats: The Rise of the New Global Super-Rich and the Fall of Everyone Else. She argued governments needed to be alert to extraordinarily wealthy people (think the 0.1 per cent) using their political and financial heft to enlarge their slice of the economic pie, rather than growing the pie itself.

Hughes said the Canada’s business community might be surprised at how much she’ll want to help the private sector, despite her writings.

“Just because she has questioned the plutocrats … I don’t think that necessarily means she’s going to be anti-business,” Hughes said.
Hassan Yussuff, president of the Canadian Labour Congress, suggested Freeland would also ensure all new spending has a gender lens so women, who have been disproportionately affected by job and income losses, aren’t left behind in a recovery.

Programs like child care could find themselves potentially with more money, observers noted, because it would be a win-win scenario for the Liberals, opposition parties and provinces, many of whom Freeland worked with through free trade talks.

Yussuff and others said Freeland identified pressure points and political nuances on the American side to use as leverage during negotiations, all the while doing her homework and seeking input from businesses, labour, premiers and MPs.
“As hard as NAFTA negotiations were, and those were extremely difficult, leading Canada’s fiscal and economic rebound from COVID-19 is going to be even harder,” Hughes said.

Economic forecasts suggest that even by the end of 2021, the economy won’t be where it was at the start of 2020. Unemployment is expected to remain high. The government estimates four million people will use a series of income support measures announced Thursday, including changes to employment insurance, that total $37 billion in proposed spending.

Federal spending has rocketed through the course of the pandemic with the deficit to $343.2 billion and debt to $1.2 trillion — both record highs.

Goldy Hyder, president of the Business Council of Canada, asked Freeland in an open letter to “establish clear fiscal targets” to use for judging “incessant demands for new spending.”

Those demands could come from opposition parties in exchange for their support on confidence votes, from departments delivering programs or Freeland’s fellow Liberal MPs, leaving her to manage multiple and politically sensitive relationships.

Rebekah Young, director of fiscal and provincial economics at Scotiabank, said the deficit and debt levels will likely act as a constraint on any new spending plans Freeland crafts because they can also slow growth in the long run.

“If they come out with a whole lot more spending, I think that’s where they risk spooking markets a bit that they are not looking at the economic conditions, they are looking at more the political side of spending,” Young said.
Freeland on Thursday couldn’t say what would be in her first budget, noting she didn’t get an economic crystal ball at her swearing-in ceremony two days earlier. She also said the government would continue to do what was necessary to support Canadians.

One of the next steps is a promised a reshaping of the social safety net that will be detailed more in a throne speech late next month, and a budget to arrive shortly thereafter that workers and businesses at home as well as abroad will closely watch.

“Her success is critical for the country and that means that she needs to have absolute support from the prime minister and from members of cabinet,” Beatty said.