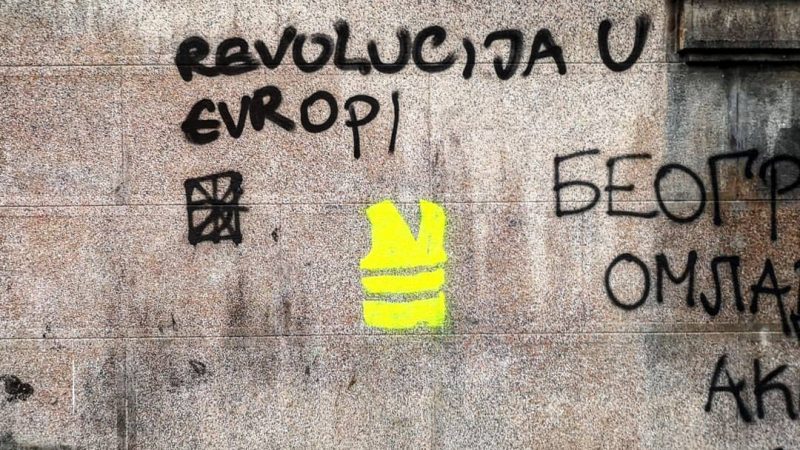 The Yellow Vests protest movement that has been rocking France since October 2018 is showing no signs it will end any time soon. Initially triggered by the French government’s proposal to increase fuel prices, the movement has turned into protests against inequality and globalization, mixed with simmering racial undertones.

In the comment section of an interview contrasting two points of view about the Yellow Vests movement in France, a Global Voices reader wanted to know how the world perceives the Yellow Vests movement. In order to answer this question, GV authors collected feedback from India, Nigeria, Russia, Serbia, Haiti, Denmark, Canada, and Indonesia. This overview is not comprehensive and doesn’t claim to be so. The aim is rather to offer a transversal perspective on a complex social movement, which tends to be perceived differently in various countries around the world.

Writing for Indian newspaper The Hindu, Dr. Emile Chabal, Director of the Centre for the Study of Modern and Contemporary History at the University of Edinburgh, analyses the complex love-hate relationship between France’s people and their government, which can help understand what brings the movement together.

Despite their ire, the gilets jaunes also demand redress from the very same state they abhor. They want the French government to lower fuel taxes, reinstate rural post offices, increase their ‘purchasing power’, cut property taxes, and hire more doctors for rural clinics. They firmly believe that the state can and should fix their problems. The fact that many of the issues at the heart of the protests relate to deep structural imbalances in the French economy makes no difference. The state is held as sole responsible and sole guarantor.

Initially published in The New Republic by Karina Piser, a Paris-based journalist, an article in the Indian Strategic Studies blog condemns the so-called extreme right-wing tendency of the movement usually depicted by mainstream media. Although it agrees with the Indian Defence Review that “the Movement is leaderless, horizontal, without any structure and completely directionless”, Karina Piser’s piece ends on a note of hope: she believes that the movement could tilt the balance in favor of a collective, united action against capitalism governance principles:

A rather surprising approach on the French Yellow Vests movement comes from Prof. Dr. Shyama V. Ramani, Professorial fellow at the United Nations University, who makes a bold comparison between this movement and the Gaja cyclone in India, a severe cyclonic storm that killed 45 people on 11 November. She describes both events as unpredictable shocks to society, requiring complex solution designs.

Protests in Haiti in response to a proposed fuel hike happened in July 2018 on the island, along with other protests against the government of Jovenel Moise. A new wave of protest is rocking the country at this very moment, against what Whitney Webb, a MintPress News journalist based in Chile and 2019 winner of the Serena Shim Award for Uncompromised Integrity in Journalism, describes as “the ultimate neoliberal experiment” made on its people by a “capitalist oligarchy”. The author draws several comparisons between the French and the Haitian political and social situations in her piece — both countries are, for example, famous for their revolutionary actions against slavery and exploitation. Linking the new wave of protest in Haiti with the Yellow Vests movement in France, she ends her article by taking sides:

As both Haiti and France have become the new epicenters of popular unrest against predatory elites, much as they were two centuries ago, it is time to see both of these current movements as part of the same struggle for basic human dignity in an era of neocolonialism, imperialism and global oligarchy.

Pernille Bærendtsen, a Global Voices contributor, came across this piece of street art in Belgrade, Serbia, in December 2018.

Pernille Bærendtsen lives in Denmark, where the Yellow Vests movement has also been widely debated from a rather political and intellectual perspective. Experts interviewed about the phenomenon tend to speculate whether a similar movement could spread in Denmark.

Abubakar Adam Ibrahim, a Nigerian journalist and author of the award-winning novel Season of Crimson Blossoms, wrote a report about his visit to France in late 2018. He wrote an article comparing the protests caused by fuel prices in Nigeria in 2012 and the Yellow Vests protests.

One thing the protests in France and Nigeria had in common was the lack of a clear leadership. Both started off as social media angst that spewed onto the streets. In Nigeria, labour leaders saw an opening in the headless mass of angry Nigerians, and entered negotiations with the government on behalf of everyone else. They reached an agreement in the night, in the dark, and by morning when they called off the protests, it wasn’t clear what exactly they had agreed to. The feeling of being sold out lingered with the protesters who trudged home to retire their placards and bury the dead. In France, they went on longer.

He also notices a difference in the level of violence he has witnessed between the two countries.

I remember thinking how peaceful [the protesters] were, other than the nuisance of impeding movement, how they chanted slogans at passing cars. A lady on a roller skate zipped alongside cars, her yellow vest a blur, smiling but chanting anti-Macron slogans.

“Don’t be scared,” my friend said. “They are mostly peaceful.”

In Canada, the Yellow Vests movement has resonated well — A Facebook group in Canada counts more than 110,000 members. A convoy of more than 150 cars is currently driving from Alberta to Ottawa to stand for oil pipelines, and, according to some media voices, white pride. Jesse Brown, a publisher in Toronto, insists on the anti-immigrant focus of the movement, denouncing a news report by CBC (Canada’s public broadcaster) on Twitter:

This @CBCTheNational report on #YellowVestCanada isn’t just late, it’s wrong. It describes a legitimate movement about jobs, with “others” focused on immigration. Fact is that anti-immigrant sentiment (w death threats) IS what CDN Yellow Vests are about. https://t.co/3hkNcj6xun

This aspect of the movement is widely documented by David Crosbie in an article analyzing the posts made on the primary Canadian Yellow Vests Facebook group. He also mentions how this tendency of the movement makes it different from the original French one:

While the Canadian Yellow Vests have some grievances in common with their French forebears, chiefly concerning economic disparity and unemployment, their message has been decidedly more hateful from the beginning.

Speaking to CTV News, French Ambassador in Canada Isabelle Hudon underlines the differences between the movements:

Isabelle Hudon says the movement in Canada appears to have been appropriated by far-right extremists espousing racist, anti-immigrant views and even indulging in death threats against Prime Minister Justin Trudeau. […] While violent individuals have been involved in the French protests, some of which have devolved into riots, Hudon says she’s never seen the protests there linked to race or immigration.

This last sentence has to be nuanced, considering, for example, recent anti-Semitic insults made by some of the Yellow Vests protesters in France. As in France, social networks serve as arenas for the movements. Simon Little writes on Global News about the “torrent of threats and abuses” faced by B.C. Radio after host Brett Mineer tweeted his criticism about the Canadian Yellow Vests movement, particularly “racist elements and conspiracy theories”, following a visit by Justin Trudeau in Kamloops.

Having the Prime Minister come to town and seeing just what gross, terrible human beings are out among us with their delusional conspiracy theories, racism, disrespect and total inability to engage in good faith conversation makes me want to get off this planet ASAP. #Kamloops

Interviewing David Tindall, a UBC sociologist with a focus on social media and social movements about these online threats and abuses, Simon Little writes that:

The online environment has also allowed people with extreme views who might once have been isolated to come together and feed off each other’s energy. […] He said he’s seen evidence of increasing polarization in Canada, something he attributes to the breakdown of rules about what’s acceptable south of the border in the Trump era.

An opinion piece published online by Edward S. Kennedy seems to be interested by the French reputation of being constantly demonstrating and protesting, as if this would be a form of lifestyle. The title says: “In France, [street] protest is a tradition, a sport, and a hobby.” The author also refers to the May 68 protests in France: “Today, seeing the rise of the Yellow Vests is like witnessing France revisits their history that’s filled with anger and blood. As one graffiti illustrating the May ’68 protest says: “Plus je fais la révolution, plus j’ai envie de faire l’amour” (in English: The more I do the revolution, the more I want to make love).
Another author, Fahrul Muzaqqi, lecturer at the Political and Social Science Department of Airlangga University, Surabaya, compares protests that took place in three countries: France (Yellow vests), Indonesia (212) and Malaysia (812). According to our Global Voices author Juke Carolina, he “emphasizes the danger of elitism among populist movements.” He adds: “Its [the populists] critique about the current representative democracy has put itself in anti-democracy traps that are far worse than democracy itself.”

Elena Dontsova, author at Global Voices and living in Russia, shares some insights about the perception of the French Yellow Vests movement there:

Federal media displayed a disaster, a nearly emergency situation in France. The President of Russia, in a meeting of the local Human Rights Council, commented, regarding the freedom of meetings and demonstrations in Russia, that: “We don’t want the same events as in Paris to happen here”

Independent media, however, described the situation with more nuances, as in the Novaya Gazeta.

More up-to-date reports say that most of the French people want the protests to end.
Media says that the French Yellow vests movement still had a lot of supporters but that the number of respondents, who considered themselves as members of the movement, has declined.

A wide range of opinions about the Yellow vests movement worldwide

Below is a short video by Brut (in French) on how the movement is seen in some parts of the world:

Overall, the spectrum of international opinions seems to range from a display of global solidarity with fellow protesters against inequality to a reflection on divisions affecting society. Three months after the beginning of the movement, the world keeps talking about it, and we keep listening: it is indeed essential to maintain a global conversation.