London police donate $3,750 worth of winter items to kids in need through Project Santa – London 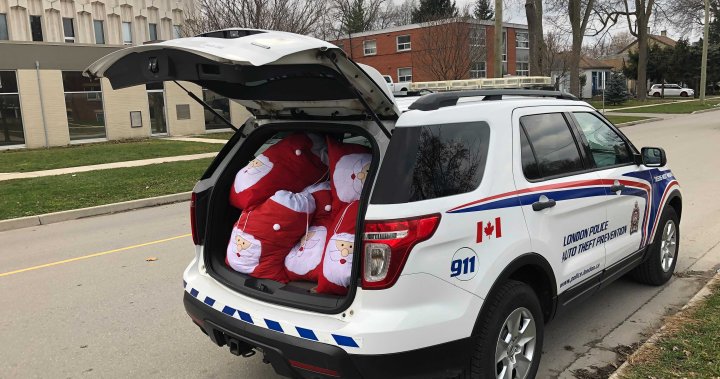 London police donate $3,750 worth of winter items to kids in need through Project Santa – London

Santa came early this year to London, Ont., with a bunch of coats, mittens and other winter essentials for children and teens in need.

The London police collected $3,750 worth of winter items with the help of the St. Peter’s Basilica, the London Police Association and Columbia Sportswear for the fifth annual Project Santa.

Since first launching in 2016, the project has delivered thousands of dollars worth of winter items to children.

“It’s been a very challenging year with COVID and police are just so truly happy to be able to do something to help people feel the holiday spirit,” said Const. Anthea Fordyce, London police diversity officer.

Outside the @mrcssi on Waterloo Street where Const. Anthea Fordyce (@LPSDiversity) , Const. Jacqueline Wilson and Santa Claus are dropping off winter items for children and teens. The first of several stops today, the donations are part of the annual “Project Santa” #LdnOnt pic.twitter.com/m0IddWZbSa

Fordyce said they are now delivering all of the items to schools throughout the city to be distributed to children and teens in need.

Because of COVID-19, all drop-offs are being done outside schools this year.

Unlike in years past where the project is just run through the school, this year the program is also looping in the Muslim Resource Centre for Social Support & Integration (MRCSSI).

“This year having the diversity portfolio I have managed to create some great partnerships with community members and it just felt great to be able to include them in the project,” Fordyce said.

Read more:
Truckloads of teddies collected for the Salvation Army

Zan Saleemi, managing director of the MRCSSI, said it was exciting to get to participate this year.

“It’s been really boring with COVID lockdown so we have not had a visitor in months!”

He said the donations will be a big help this year for the families the organization looks after.

“We are working with the most vulnerable families within the community who are already dealing with other issues so this is able to help.”