Nest on Wonderland hires own investigators to find cause of London, Ont., building collapse 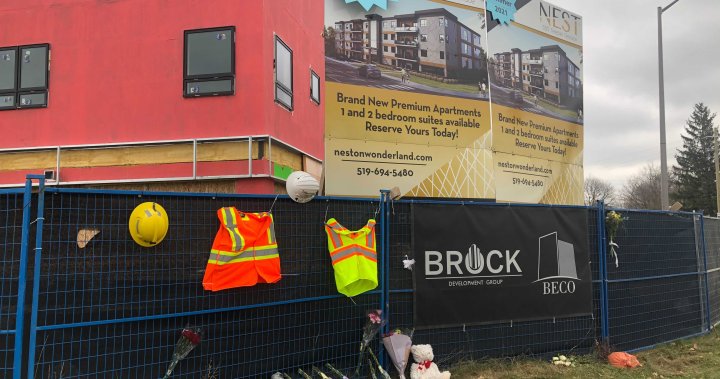 Nest on Wonderland hires own investigators to find cause of London, Ont., building collapse

The company that owns the building that collapsed in southwest London, tragically killing two people, says it has hired its own “top forensic structural engineers” to investigate the cause.

The partial collapse occurred just before 12 p.m. on Friday in a four-story building at 555 Teeple Terr., the site of Nest on Wonderland, which is currently under construction.

Two people died and four others were taken to hospital following the collapse. As of Sunday, two of the people take to hospital have been discharged and two remain in stable condition.

The company’s website described the building as “brand new premium apartments” under construction in southwest London, set to open in spring or summer 2021.

“We are working closely with the Ministry of Labour and with local authorities on the investigation,” Michelle Doornbosch, president of Nest on Wonderland, said in a statement late Monday.

Doornbosch said the company is actively involved in the Ministry of Labour’s investigation.

“As with any building project, we work as a team and constantly rely on the expertise of our experienced architects, engineers, consultants and the municipal approval authorities to design and review all specifications to deliver a structurally safe and sound building,” she said.

The company said it plans to provide answers as soon as possible and has “worked with our insurer to retain some of the top forensic structural engineers in the country to investigate.”

The Ministry of Labour is leading the official investigation into the collapse. On Monday, Ontario Labour Minister Monte McNaughton told Global News his ministry is “going to move mountains” to get answers about the tragedy as soon as possible.

While he was unable to provide a timeline for when the investigation will be complete, McNaughton says engineers are currently on site at 555 Teeple Terr. as they continue to look into what caused the partial collapse.

“It will be a thorough investigation, but I can commit and promise to those workers and to the entire community of London and southwestern Ontario that we’re going to get them answers.”

The two deceased men have been identified as 21-year-old John Martens from Langton and 26-year-old Henry Harder of Tillsonburg.

Two fundraising campaigns have been set up to help the families of the Martens and Langton, as well as the others injured in the collapse.

The GoFundMe page says Harder leaves behind his wife and their three-week-old baby.

One of the contractors on the site, East Elgin Concrete Forming Limited (EECFL), has since confirmed that the two deceased workers are their employees.

“Our hearts go out to the affected workers, their families, friends and co-workers,” said Tyson Van Leeuwen, president of EECFL.

EECFL has also confirmed it is working with investigators to determine the cause.