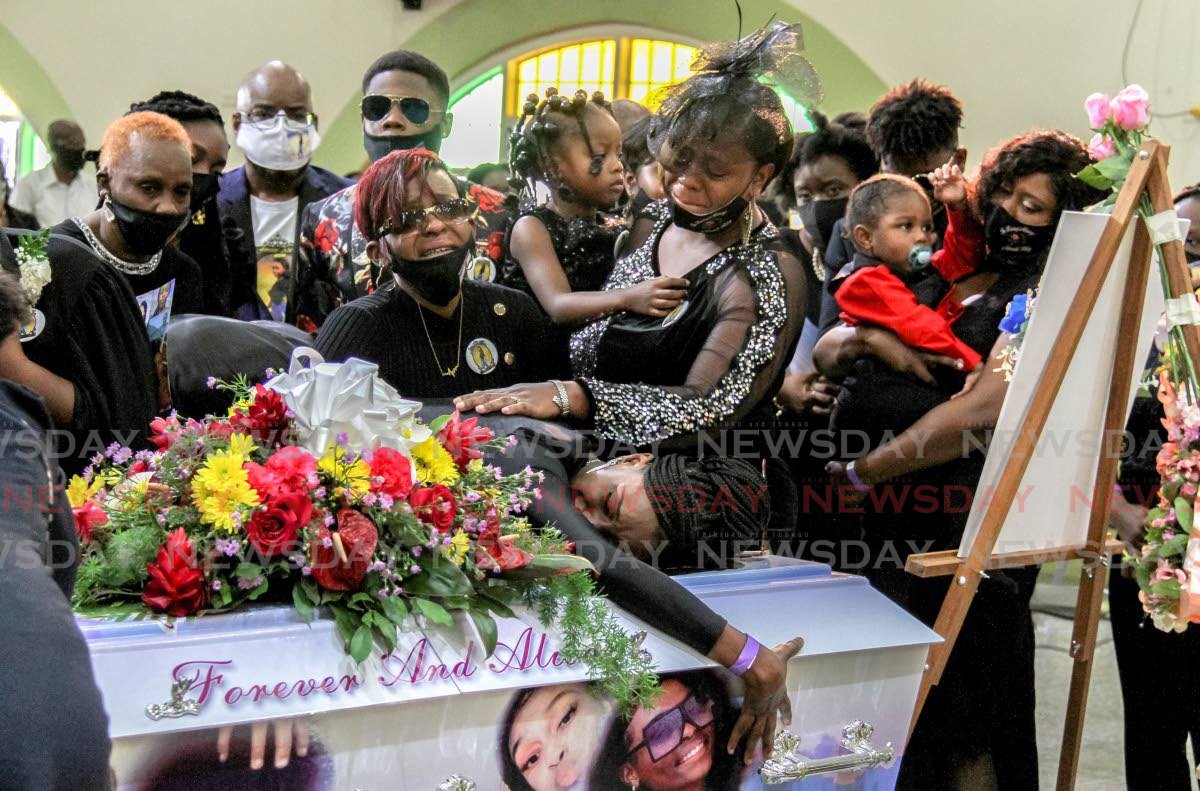 Friends and family of Ashanti Dennisia Riley said their final tearful goodbyes to the brutally slain 18-year-old on Monday afternoon. Her funeral was held at Mount D’Or Seventh Day Adventist Church and her body laid to rest at the San Juan Public Cemetery.

“From Sunshine Avenue to sunset, Santa Cruz,” he said. “Hers will forever be the sad but true story of a teenager who left Sunshine Avenue (and) ended up, as it were, figuratively on Sunset Boulevard. From sunshine to sunset.”

Ashanti was last seen getting into a blue Nissan Almera on November 29 at the corner of Sunshine Avenue and Lloyd Street in San Juan. She was planning to go to Cocorite for her grandmother’s birthday celebration.

Her body was found in a shallow stream in Upper La Canoa, Santa Cruz five days later. An autopsy showed she had been stabbed and beaten.

At Riley’s funeral, her aunt Lisa recited a poem she had written for her niece.

“She had big dreams and plans to reach for the stars but instead she rests in God’s loving arms.”

Later, the pastor said although the family struggled to deal with her loss, they were grateful she had been found.

“There are many parents who are still grieving because they don’t have a trace as to where their child might be.

The pastor said in the four years since Shannon Banfield’s funeral on December 13, there had been no convictions in her case.

In his grief, he said, he had been tempted to abandon his ministerial duties in favour of vigilantism.

“I have been a minister for just over two decades, teaching and preaching on the theology of forgiveness. And I must confess that, in moments like this, it is easier to preach it than it is to practise it, especially when we live in a society when the justice system is a bit (slow).”

The pastor added, however, that any acts of “revenge and retribution” against her murderer would do “absolutely nothing” to bring her back.

Saying women should be respected and protected, Riley said, “She is our mother, daughter, cousin, niece, aunt, sister. She is not our enemy.”

He said Ashanti’s murderer was not the only “beast” out there.

“This is not the first time such a crime has been committed. The exploitation of women has been going on a long time.”

He said many media representations of women fed the “sinister imaginations of perverted men.

“We are living in a very promiscuous and perverse society…(Ashanti’s) demise must signal a call for all of us to confront this national scourge once and for all.

“It is our responsibility to deal harshly with this scourge that is affecting the vulnerable of our society.”

The pastor said the time had come for women to be more assertive with men who made them uncomfortable.

“You have to be able to stand and declare to men, ‘You can watch me but don’t touch me. You can admire me without desiring me.’ For you are a woman of extraordinary calibre.”

At a press conference last Tuesday, Police Commissioner Gary Griffith said he intended to discuss legislation surrounding the use and availability of pepper spray with the Attorney General. Griffith said if such legislation could help save one woman escape her attacker, it would be useful.

He said the media should discourage advertisements that “deface or devalue” women.

“Women are not disposable species of humanity to be used, misused, abused while your accused enjoys more privileges and pleasure and freedom.”

The pastor noted that he was thankful for the “good men” who stood with Ashanti’s family to protest her murder.

On Saturday, friends, relatives and MP for Barataria/San Juan Saddam Hosein held a “Drive for Justice” motorcade from Ashanti’s Lloyd Street home to Woodford Square in Port of Spain.

On Monday, the pastor said, “On behalf of the Riley family I want to say thank you to all the men who came by and showed their solidarity and support against this scourge.

“Not all men have sold out. There are still some men of dignity, morality, integrity and decency…who will not be sold out.”

He said women needed men who would “take them from their location and carry them to their destination. Men who will take them out and bring them back.”

On the issue of PH taxis, the pastor said the real issue went far deeper than those surrounding the legality of such taxi drivers.

“The argument is far deeper than who was a badge and who does not. Evil knows no boundaries, no borders, no badge. Legislation alone was never a crime-stopper.

Riley’s funeral was attended by Minister of Education Dr Nyan Gadsby-Dolly and Minister in the ministry Lisa Morris-Julian.