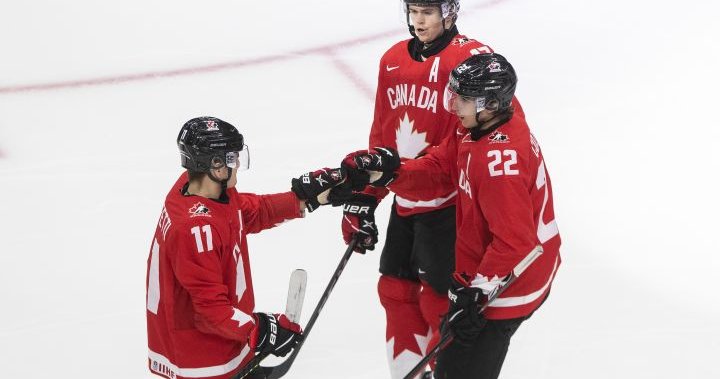 A generous schedule helped Canada both find its game legs and win three straight to start the world junior hockey championship in Edmonton.

Time’s up for the host country to develop chemistry and hone its systems.

Canada faces Finland on Thursday in a meeting of 3-0 teams in Pool A.

Top seed in their pool and a favourable quarterfinal matchup is at stake. The loser will face a tough quarterfinal opponent from a deep Pool B.

The top four teams in each pool advanced to Saturday’s quarterfinals. Monday’s semifinals are followed by Tuesday’s medal games.

“It’s going to be good to get that game in against Finland and kind of feel out what the rest of the tournament is going to be like,” Canadian defenceman Kaiden Guhle said Wednesday.

Arguably in the easier of the two pools, Canada faced lower-ranked countries to open the tournament.

The defending champions thrashed Switzerland 10-0 and short-staffed Germany 16-2, and wasn’t tested much defensively by Slovakia until the third period in a 3-1 win.

The hosts have outscored their opposition 29-3 and outshot it a combined 119-48.

“The last couple games it’s been us really taking it to them and the other teams sitting back and just defending,” Canadian forward Cole Perfetti said.

“It’s going to be good for us heading into the medal rounds to play a team like Finland to get us prepared, to tune up on the defensive side of the game, which we haven’t had to work on as much the last couple games.”

Canada had Wednesday off while Finland blanked Slovakia 6-0.

The Finns are also cruising into the New Year’s Eve matchup against Canada, although with a less gaudy 15-4 goal differential over three games.

“Of course it’s going to be a tough game for us,” Finnish head coach Antti Pennanen said. “They have a lot of good players and are a well-coached team also.

“It’s going to be a big challenge, but I think we’ll be ready for that.”

The majority of Canada’s players hadn’t participated in meaningful games in months before arrival in Edmonton because the COVID-19 pandemic shut down their leagues in March.

Exhibition games against university teams were cancelled after a pair of players tested positive and the entire team underwent a 14-day quarantine midway through Canada’s selection camp.

Short on games as a team, Canada had the luxury of feeling its way into the tournament against weaker opponents.

“Every game so far has been a stepping stone to get us to the top of our game. We’re just improving every single game,” Canadian co-captain and scoring leader Dylan Cozens said.

Guhle feels Canada has forged an identity since a 1-0 pre-tournament win over Russia.

“Our forecheck is very tough to play against,” the defenceman said. “I think we’re very resilient and very relentless.

“I think we’re just a big, fast team that makes it tough on the other team to play against.”

Watch below: Some Global News videos about the 2021 world junior hockey championship.