Three people have died and 91 others have tested positive for the coronavirus, the Middlesex-London Health Unit reported on Friday, continuing a disturbing surge in cases in recent weeks that has local health officials sounding the alarm and urging people to follow lockdown restrictions and public health guidance.

According to health officials, the three deaths reported Friday involve a man in his 50s who was not associated with a seniors’ facility, and a man and woman in their 80s and 90s who were associated with a long-term care home.

The deaths are the 15th, 16th and 17th to be reported so far this month. The number of deaths so far in January is about half the number seen during the entire month of December 2020.

The region has reported at least 755 cases since the start of January, more than every preceding month of the pandemic, except for December, which saw a record 1,724 cases, driven largely by a surge in cases in the latter half of the month. (December reported 230 cases in its first seven days.)

Of the 91 new cases reported on Friday, 75 are from London, while five are from Middlesex Centre, three are from Strathroy-Caradoc, two are from Thames Centre, and one each is from Lucan Biddulph and Southwest Middlesex.

The deluge of cases in recent weeks has hampered local contact tracing efforts. At least 85 of the 91 cases reported Friday have ‘pending or undetermined’ listed as the exposure source. Six are listed as being due to an outbreak.

Although the 91 cases reported Friday is nowhere near the record 160 reported on Tuesday, it’s still roughly twice the number of cases the region was seeing daily this time last month.

“COVID is here. And the importance of adhering to the public health guidance and recommendations and restrictions that are in place remains as important as it was as when we started this journey in February and January of 2020.”

Asked Thursday whether London could or should implement a curfew akin to the one in place in Quebec in a bid to quell local case numbers, Mayor Ed Holder said it was premature to get to that stage, adding that he hasn’t seen that such a move is particularly effective.

“You know what I would support, if you could somehow do this, is anti-gatherings more than curfews,” he said.

“Because, quite frankly, the issue that I have said time and time again is the problem of larger gatherings of people coming together from disparate households, and when people don’t even realize that they may have the virus, they’re asymptomatic.”

The region’s test per cent positivity rate stood at 5.3 per cent as of last week, up from 3.7 the week before, health unit figures released Wednesday show. Roughly 9,738 people were tested last week, down from 11,188 the week before.

Middlesex Centre has been the locale hardest hit by the pandemic, according to health unit figures. Despite posting just 168 cases in total since the pandemic began, the municipality’s incidence rate is equivalent to 950.5 per 100,000 due to its smaller population.

The number of active COVID-19 inpatients in the care of London Health Sciences Centre fell by one for a second day to 40.

The number of people in critical or intensive care due to COVID-19 also fell by one to 12.

At the same time, however, active staff cases at LHSC have risen by one to 32, the organization said.

At St. Joseph’s Health Care London, meantime, no COVID-19 inpatients were reported to be in the care of St. Joseph’s Hospital, but staff cases within the organization as a whole rose by one to a total of 13.

The new staff case was not linked to an ongoing outbreak at Mount Hope Centre for Long Term Care, which has infected at least 22 residents and eight staff members and left two dead.

According to the health unit, at least 297 people have been hospitalized for COVID-19 during the pandemic, including 57 who have needed intensive care.

Earlier this week, LHSC’s chief medical officer, Dr. Adam Dukelow, told 980 CFPL that increased pressures from the COVID-19 pandemic had resulted in some surgery cancellations. How many isn’t clear.

A report from CBC London found that LHSC’s VP of clinical programs, Julie Trpkovski, told surgical teams across the organization on Monday that the move to shutter some operating rooms came as a result of a rise in cases and outbreaks locally, capacity challenges and staff shortages.

A day later, it was reported that, as of Jan. 5, Trpkovski was no longer with the organization.

“We thank Julie for her service and wish her all the best in her future endeavours,” an LHSC spokesperson said via email.

When pressed for further detail as to whether Trpkovski resigned or was let go, the spokesperson replied, “we have no further comment.”

Before the holiday season, LHSC warned that an expected case deluge in the new year would make it difficult to ramp back up to typical surgery volumes. 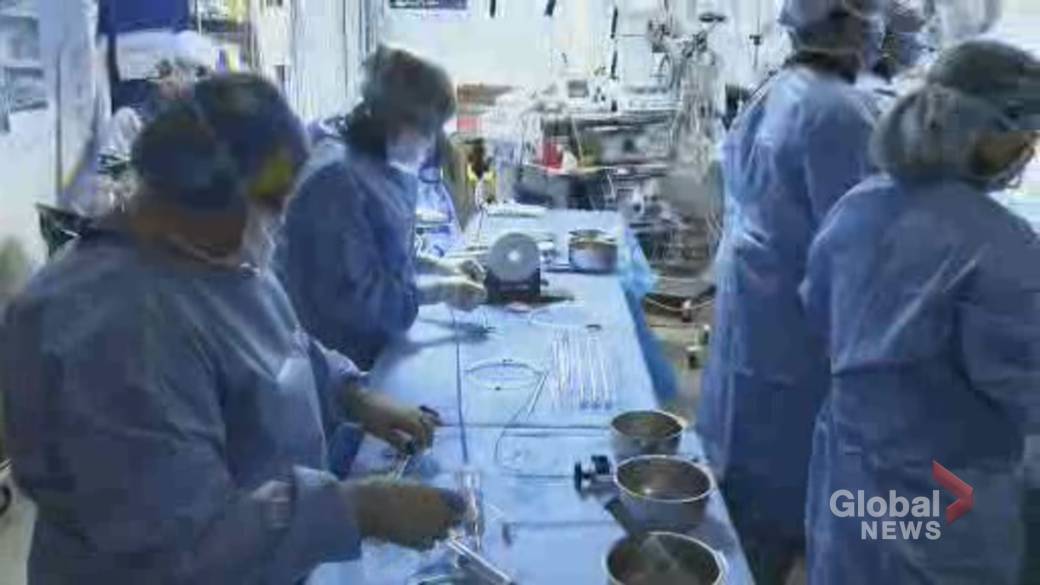 Elsewhere, seven other outbreaks remain active at the following facilities, declared on:

Since March, the region has seen at least 80 institutional outbreaks in London and Middlesex, including at least 56 at local seniors’ facilities.

Seniors’ facility outbreaks alone are tied to at least 255 resident and 245 staff cases and 55 deaths.

No new school cases have been reported in the region, according to the health unit.

Only one case is currently active involving a school. The case is tied to Lord Dorchester Secondary School, the health unit says.

At least 173 cases have been reported since the start of September that have been tied to schools or child-care centres, the health unit says.

Two outbreak declarations remain active — one at Covenant Christian School and one at Lord Dorchester Secondary.

All schools in southern Ontario will remain closed for in-person learning until Jan. 25, a move the province’s top doctor said was needed to protect students and staff from surging rates of COVID-19.

Dr. David Williams said Thursday that students in 27 southern regions would be taught entirely online as the government looked at adding new safety measures in schools.

All students are currently learning online as part of a provincial lockdown that began Boxing Day.

The province said northern Ontario students will still return to in-person classes on Monday, but a lockdown in that region that was to lift this weekend will be extended for two weeks.

However, Summers noted Thursday that there is “very little vaccine” currently available in London and Middlesex, but there is some.

“As per the provincial guidance, and consistent with where we have seen the most illness and death over the course of this pandemic, vaccines are being prioritized for long-term care home and retirement home staff, and residents when it’s possible to fulsomely move the Pfizer vaccine, if available, out to those facilities,” Summers said.

He stressed, though, that there is not currently enough vaccine to cover all long-term care and retirement home staff in London and Middlesex.

“We try to ensure that we’re using that vaccine in a way that minimizes the potential for people to die, and at this point in time, that remains people who are working in congregate care settings for seniors,” he said.

Read more:
Doug Ford says Ontario will run out of Pfizer COVID-19 vaccines by end of next week

Summers says the health unit and its partners will continue following provincial direction when it comes to which groups should next receive the vaccine, adding that they await the arrival of more doses to get the vaccine out to those who need it.

Earlier this week, LHSC officials said roughly 500 people are being administered the vaccine daily, with the hope of doubling that number in the near future.

Provincially, the Ford government says 14,932 vaccination doses were administered as of Friday morning, with 87,563 administered in total.

Ontario said earlier this week that all long-term care residents, workers and essential caregivers in COVID-19 hotspots will be vaccinated by Jan. 21.

It comes as the region recorded a 5.3 per cent test per cent positivity rate as of last week, according to figures released Wednesday by the health unit. The rate is up from 3.7 per cent the week before.

Both centres are continuing to operate by appointment only. Appointment testing for certain asymptomatic people is also continuing at some local pharmacies.

The Carling Heights centre has recorded between 454 and 537 visits per day between Dec. 31 and Jan. 7, according to the health unit.

Current average visitation rates at Carling Heights are among the highest the facility has seen during the entire pandemic.

Oakridge Arena, which was closed over the holiday season, reopened on Monday and has seen between 318 and 369 visits per day so far this week.

It’s a record-breaking figure for daily infections, even after factoring in 450 cases from Jan. 5 and Jan. 6 that were included in the Friday total.

The province also reported 26 more deaths from the virus.

Health Minister Christine Elliott says 1,382 new cases are in Toronto, 691 are in Peel Region, 427 are in York Region, 213 are in Niagara and 184 are in Windsor-Essex County.

The province says 369 people are intensive care in hospitals and 250 are on ventilators, with 1,446 hospitalized in total.

He says the province could see more “extreme” measures put in place if residents ignore public heath rules aimed at curbing the spread of the virus.

The premier did not say what additional measures the province is considering or when they could be introduced.

But he says new COVID-19 projections that will be released next week are very concerning.

Ontario’s associate medical officer of health says the province may need to return to a stricter lockdown similar to the one imposed last spring.

Dr. Barbara Yaffe said the current case rates are “scary” and urged people not to be complacent about following public health measures.

The current provincial lockdown began Boxing Day and is set to last until Jan. 23.