One of two former paramedics who treated 19-year-old Yosif Al-Hasnawi the night he died in Central Hamilton said he was “shocked” and “emotional” when he learned the patient died of a gunshot wound.

Christopher Marchant, accused of failing to provide the necessaries of life, testified in his own defence on Tuesday during day 22 of his and fellow paramedic Steven Snively’s trial in Superior Court.

Marchant spent the day describing his account of what transpired on Sanford Avenue near Main Street East on Dec. 2, 2017 when Yosif Al-Hasnawi was shot after a chasing two men.

During questioning from counsel Jeff Manishen, who represents Marchant, the former Hamilton paramedic said he was in the situation room with an emergency doctor and staff when he learned Al-Hasnawi died from a .22 calibre gunshot wound.

“Well, I was shocked,” Marchant told a virtual courtroom on Tuesday.

The paramedic originally thought Al-Hasnawi was suffering from a pellet gun wound, or so he had heard the night that he and partner Snively arrived on scene.

Marchant told the court he had never dealt with a gunshot wound in his time as a paramedic and that his only experience was with literature from his college education.

He did say he had observed people, including himself, who had been shot with a pellet gun.

“Sometimes there’s a small break in the skin, sometimes it’s just a red welt, but more often than not it’s painful and the person experiences that or shows it anyways,” Marchant told Manishen.

Upon arrival to the incident on Dec. 2, Marchant said he removed the stretcher from his ambulance and began moving toward a crowd of about 10 to 15 people, making contact with one of three firefighters on scene who told him that “it’s a small wound, it’s a pellet gun.”

The former paramedic suggested to his counsel that the moment was significant in his assessment of the situation at hand.

“Well, hearing any information on scene from a first responder, whether it’s fire or police, holds a bit more weight when we’re taking in our observations and what has happened,’ said Marchant.

‘Is this how he acts normally?’

Marchant’s first encounter with Al Hasnawi was when the 19-year-old was on the ground next to a police cruiser. He added that the scene appeared “relaxed” with little urgency as a firefighter and police officer stood over the victim.

Snively made first contact with the victim, according to Marchant, and was told that Yosif had a strong radial pulse, good skin colour and appeared to breathing normal.

As he began an examination, the paramedic said Yosif’s father was there and communicating with Al-Hasnawi in Arabic, which Marchant claims was the only language spoken by the victim until he was placed in the ambulance.

Upon an examination of the wound, the accused described it as a “pimple” that looked like it had been recently squeezed.

Marchant said he never heard Al-Hasnawi say “I can’t breathe” during his probe and suggested that Yosif’s father, Majed, “wasn’t helping” with his assessment.

“I would say it was more or less his presence was just interrupting my assessment and way of trying to get answers or elicit anything out of the patient, because any time I asked the patient a question, it seemed that he would speak to his father in Arabic, ” Marchant told the court.

Manishen then asked Marchant if he said “is this how he acts normally?” to Al-Hasnawi’s father during his assessment and why. The former paramedic said he did and it was because he still believed he had been struck with a pellet gun and overreacting.

“And as the father, I would assume that he would know if Yosif, faster, as one of the closest people around him, would know if this is his normal mental status or not,” said Marchant.

‘The road we were going’

In earlier testimony from some Crown witnesses, including Yosif’s brother Ahmed, it was suggested that one of the paramedics said, “this guy should win an Oscar and laughed.”

When asked by Manishen if he had made a comment like “he should get an Oscar for his acting” or something to that effect while tending to Al-Hasnawi, Marchant said “no” and also denied laughing at any point.

In his testimony on Dec. 8, Ahmed Al-Hasnawi told a courtroom that paramedics grabbed Yosif “by the hoodie” and “threw” him on a nearby stretcher just before his transport to hospital.

Manishen picking up on that suggestion asked Marchant if that also happened.

Marchant said “no” and recalled another of Yosif’s brothers, Mahdi, attempting to lift him without any direction from the paramedics.

“Yosif was placed as safely as we could put him on the stretcher with somebody that’s not cooperating with the lift,” Marchant said.

After Al-Hasnawi was placed into the ambulance, Marchant said he and Snively agreed on “the road we were going” after a discussion and transported the victim to St. Joe’s Hospital for treatment.

Marchant would explain to the court they made the request to dispatchers for St. Joe’s based on Al-Hasnawi’s “confused” and “slightly combative” state.

“The reason why I requested and St. Joe’s was because I know that that’s the emergency psychiatric treatment center and that’s this is the decision that Steve and I both agreed to go down,” said Marchant.

‘We are not in the kidnapping business’

In 2016, a complaint was filed about Chris Marchant’s handling of the heart patient while on duty with the Hamilton Paramedic Service (HPS).

On Monday, the Crown’s Linda Shin asked Justice Harrison Arrell to consider documents of the incident as evidence, arguing that Marchant’s “state of mind” was similar to the nature of the call to aid Al-Hasnawi in 2017.

The incident revolved around an HPS call out to a workplace after a man was found unconscious in a lunchroom on Dec. 6, 2016.

An HPS report revealed that the patient told Marchant, one of two attending paramedics, he did not want to go to the hospital. The patient was eventually transported at his co-workers’ insistence.

The victim had heart surgery and a two-week hospital stay after the incident.

One of the man’s co-workers filed a complaint with the HPS claiming Marchant was “not professional with the patient” and that the paramedics “were reluctant to transport the patient.”

The complainant also said one of the paramedics told them “we are not in the kidnapping business.”

In his own incident report, Marchant responded to the accusation saying it was “unsubstantiated” and “rude and demeaning.”

A supervisor met with Marchant in April 2017 after an investigation and told the paramedic that he did not make “reasonable efforts” to convince the patient to go to the hospital.

The report also suggested that Marchant did not “appreciate the severity of the patient’s condition” and that the incident was a “near miss” that could have led to the patient’s death.

Marchant was ordered to review medical journals as well as policies and procedures but was not disciplined.

In his ruling, Justice Arrell said the application was of  “limited probative value and very limited in similarity to the case at bar.” He rejected the admission. 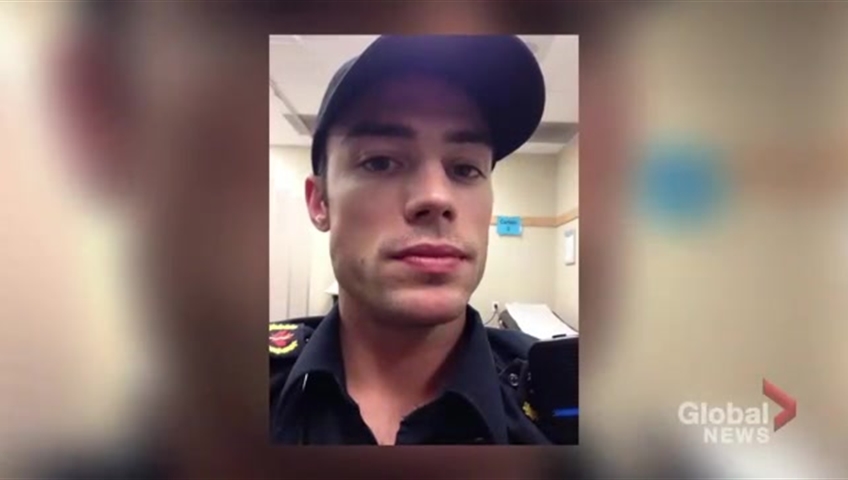