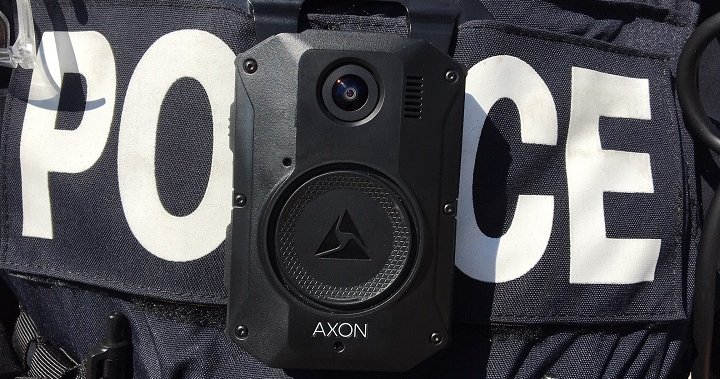 The Toronto Police Service says all front-line officers will be deployed with body-worn cameras by the end of October.

Superintendent Michael Barsky, who oversees the project, says roughly 650 officers are currently wearing the cameras. He says that’s about 20 per cent of Toronto’s front-line members.

Toronto police recently reported the signing of a five-year deal with Axon for $34 million, which includes 2,350 cameras and cloud-based storage.

Barsky says the cameras, adopted late last year, create an objective account of how police officers deal with the public.

“To look at that in a controlled environment, where we can actually see if a situation had escalated, if there was a reason or rationale for what happened,” Barsky explained.

Read more:
Police body cameras in Canada: How common are they and do they reduce excessive force?

The cameras are meant to hold both sides accountable. Sgt. Chris McCann, who says he’s been wearing a body camera for a couple of months, says he’s become accustomed to the extra piece of equipment.

“It hasn’t changed the way I interact with the public. Everything remains the same. Technically, you gotta remember to turn the camera on with any interaction,” he said.

The need for improved policing is well-documented. Two reports from Ontario’s Human Rights Commission found Black people in Toronto are “disproportionately” arrested and subjected to use of force by police.

“Throughout my life, I’ve been asked to prove that I’m where I’m supposed to be,” says law student and activist Sandy Hudson, who grew up in Toronto. Hudson says body-cameras simply illustrate the obvious.

“OK, we’ll be able to see more and more of what we already know, that the police harm us more than they do other communities.”

Critics note the officers who arrested George Floyd in Minneapolis in May of 2020 had body cameras, arguing they didn’t stop the police brutality that killed him.

Along with issuing cameras to front-line members, Barsky says Toronto will post procedures surrounding their use online.

“We’re also going to show the world what our procedures are, what the operating procedure is, and what the requirements of an officer in using this technology [are],” Barsky said. “Nowhere in Canada has that happened.”

Not every jurisdiction, however, is sold on body cameras. Halifax, where police issued a formal apology for Street Checks in 2019, is taking a cautious approach.

Lindell Smith, a city councillor who is also chair of the Halifax Board of Police Commissioners, says there’s no consensus on important questions, including whether the cameras help end abuses like racial profiling or distract from finding solutions.

“And we’re seeing de-funding the police (movement) and we want to deal with racism within the police forces. It doesn’t deal with those issues. It just makes it visible.”

Toronto is investing $34 million in the cameras, over five years.

The estimated cost of the Halifax program is $3.7 million over five years. If Halifax decides to proceed, they could be fully deployed by 2023.