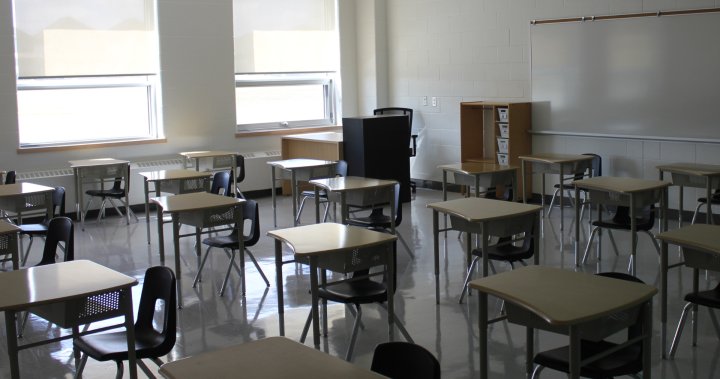 About 700,000 Ontario students are expected to be returning to classrooms this week after every medical officer of health in the province approved a return in late January, Education Minister Stephen Lecce told Global News.

Last week, the minister said lower COVID-19 transmission rates across the province and investments in protecting students and staff were key in the decision, including the capacity of voluntary asymptomatic testing.

“This is a big game-changer, something that we had in the hot spots in the fall,” said Lecce.

“We’ve really stepped up the ability to make sure that our public health units on the ground could deploy tests to make sure that if there’s any issues involved, we get in there, we test, we detect, we isolate and ultimately take action if required.”

The chair of the Hamilton Wentworth District School Board (HWDSB) Dawn Danko says the 25,000 polymerase chain reaction (PCR) tests made available for city schools will be under the purview of public health and will likely go to target “high-risk” schools in the region should there be an outbreak.

“When we have an increase in cases and in a location in the community or where maybe there’s a trend traditionally where they’ve had higher cases than public health, we can say this is a school where we should do some asymptomatic testing to get a sense of “are there cases that we’re not detecting,’” Danko said.

The Hamilton Wentworth Catholic District School Board (HWCDSB) has been collaborating on the rollout of prospective asymptomatic testing with public health according to chair Pat Daly.

The board had gone far enough to offer a voluntary asymptomatic testing clinic at Bishop Ryan Catholic Secondary School on Saturday, before being cancelled due to technical issues.

Daly called the option of targeted testing “an important addition.”

Students will experience a few other changes in safety from September’s return amid the pandemic including the wearing of masks outdoors when physical distancing cannot be maintained and enhanced COVID screenings prior to entering a school.

“Our staff have been doing it online for a number of months, but now with the new requirement, students will be required to do so as well,” said Daly.

“Most high school students have a mobile phone so they could do it themselves. But if they don’t, we would assist them with school staff.”

Lecce admitted one of the new challenges the province has to deal with amid the February return is the introduction of COVID-19 variants which were not an issue in the September return.

Last week, the city’s medical officer of health, Dr. Elizabeth Richardson, said despite the weekly rate of new cases being cut in half, the community needs to “double down” on lockdown measures with the emergence of the variants in Ontario.

Lecce believes the changes in safety protocols and the “flexibility” to alter them again if need be should keep kids safe.

“The world has changed even since December in the context of these variants. So that’s the variability here that we all have to deal with and be flexible with,” Lecce said.

In all, the HWDSB had to deal with over 200 COVID-19 cases among staff and students during the fall/winter return. More than 170 of those cases were during the months of November and December.

However, Danko said the increase in cases in schools was connected to a rise in cases in the general community which forced the latest lockdown and the shuttering of in-person classes.

“That’s because we were seeing cases come into the school. We weren’t seeing very often evidence of any spread within the school, which tells us that our protocols were working,” said Danko.

Both the city’s public school chairs say, aside from following COVID-19 safety protocols, the biggest challenge will be closing the learning gap between students who struggled with the remote learning experience and those who didn’t.

Danko says the problem will be less magnified with secondary students who just finished a term and are “starting fresh” on a new term.

However, she says correspondence from a number of parents suggested there was trouble with younger elementary students engaging in the online curriculum, something the board will put “more of a focus” on in the February return.

“When we have that disparity between people who maybe had some additional support from home or who thrived online in remote learning and others who didn’t, we know that that is going to be a challenge,” said Danko.

“We might need to add extra support. We wouldn’t be looking at changing classes or grouping people together.”

The Catholic school chair says that is also the case with some populations in their board based on demographics. Daly says additional funding from the ministry of education should help with some of that adding the option of summer classes.

“They have announced that just recently they’ll be providing additional resources to school boards, particularly over the summer in the form of various learning programs to support those students that have fallen behind,” Daly said.

During the fall 2020 return, both school boards faced a shortage of bus drivers which forced rotating bus cancellations. The Hamilton-Wentworth Student Transportation Services (HWSTS) was able to close the gap in late November where only six routes were not being covered – compared to 22 open routes in September.

Both chairs say they have been assured by the HWSTS that there will be no delays or cancellations come Monday when the first students make their trip back to in-person learning.

“In the fall, we had gotten to a point where we weren’t cancelling any routes,” said Danko. “So we are expecting them to be able to provide full service starting on Monday.”

Daly concurred saying he was unaware of any issues and expects the service to parallel that of what students received in December.

“It’ll be the same as it was before Christmas, obviously the wearing of mask and seating arrangements will be in play.”