Go to the ER if your child is really sick amid COVID-19 pandemic: Ontario doctors

Go to the ER if your child is really sick amid COVID-19 pandemic: Ontario doctors

Rising COVID-19 cases among youth and the rare virus-related death of a 13-year-old Brampton girl has some emergency physicians urging parents to keep an eye out for a set of symptoms that might signal a child has contracted the virus.

“If your child’s really lethargic and not responding in an appropriate way and interacting with you abnormally, that to me is a sign that medical attention is required,” says Dr. Jeremy Friedman, associate pediatrician-in-chief at Sick Kids Hospital in Toronto.

Read more:
Ontario expects everyone 18 and over to be eligible for COVID-19 vaccine by end of May

Dr. Sarah Reed, from the Children’s Hospital of Eastern Ontario in Ottawa, says she’s seen cases where a child has had to be admitted to the ER with severe symptoms from COVID.

Reed says in some of those cases, parents have actually apologized for the visits.

“You know, I think people want to be protective of the resources,” Reed said.

“We’re all watching the news and on Twitter and seeing how the health-care system is so stretched and stressed at this time.”

Interim chief of pediatric emergency at McMaster Children’s Hospital Dr. Christopher Sulowski says the ER at that facility has seen about a 50 per cent decline in visits since the pandemic began. 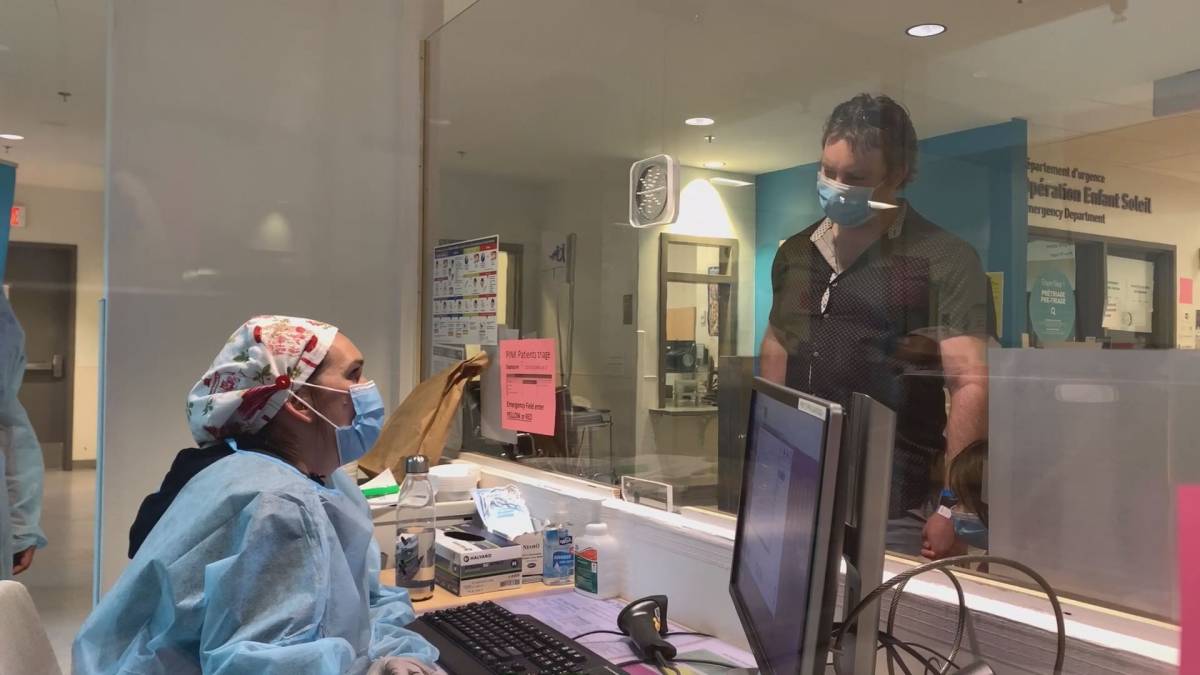 He and his peers believe the decline was due to parents’ concern over utilizing valuable health-care time amid a crisis with a minor or trivial complaint.

But during his experience in the past year, he’s seen a bump in sicker patients checking into the pediatric ER from what he was used to seeing prior to the pandemic.

“I think a lot of parents were [delaying going to the ER] with good intentions,” said Sulowski.

“But we encourage families to not take on that responsibility themselves and to come in and see us if they’re at all worried.”

Read more:
Ontario soon to have another field hospital as Hamilton site prepares for operation next month

The pediatric emergency department at Ottawa’s children’s hospital has also seen downturns in visits during periods of lockdown – as much as 150 visits a day.

Hospital executives believe concerns over contracting the virus during a stay at an ER also contributed to the decline.

Reed believes Ontario’s hospitals are safe as the health-care system has gained valuable experience amid the pandemic with disinfection protocols and the donning of PPE.

“I’m wearing our protective equipment, there’s physical distancing in the emergency department. We know how to do this safely,” Reed said.

Sulowski admitted there was some trepidation at the beginning of the pandemic with PPE shortages but he says much of that has been resolved in the past year with suppliers.

“We’ve even purchased extra stethoscopes as well in the pediatric ER so that a doctor is not walking from one room to another room and making contact with one child and then using it again on another child,” said Sulowski.

Recent studies have shown that most children have generally been unaffected by the virus.

A study by University of Guelph researchers, year-over-year, showed that more than one-third of confirmed COVID-19 cases among children were asymptomatic.

The probe, which analyzed close to 220,000 positive cases in Ontario from January 2020 to January 2021, showed that 35 per cent of children under the age of nine who tested positive for the virus were asymptomatic.

Another 31.4 per cent only showed a single symptom with the most common being a fever.

However, with the administering of COVID-19 vaccines to older-aged Ontarians, public health units are experiencing a shift in data to younger demographics who appear to be absorbing the brunt of new infections on a daily basis.

Read more:
Pfizer-BioNTech could test vaccine on kids as young as 6 months by September

Over the last month in Hamilton, around 70 per cent of all new cases have been recorded in people under the age of 50.

On Thursday the city revealed that about 21 per cent of its active cases are from those under 19.

Reed believes the change suggests parents should now be more watchful with that shift and the emergence of more infectious variants of concern.

“As our numbers are higher across the province, I think we need to have our antenna up for perhaps these more rare situations where kids can get sick,” Reed said.