Three part-time Sangre Grande farmers give away 2,000 lbs of watermelon 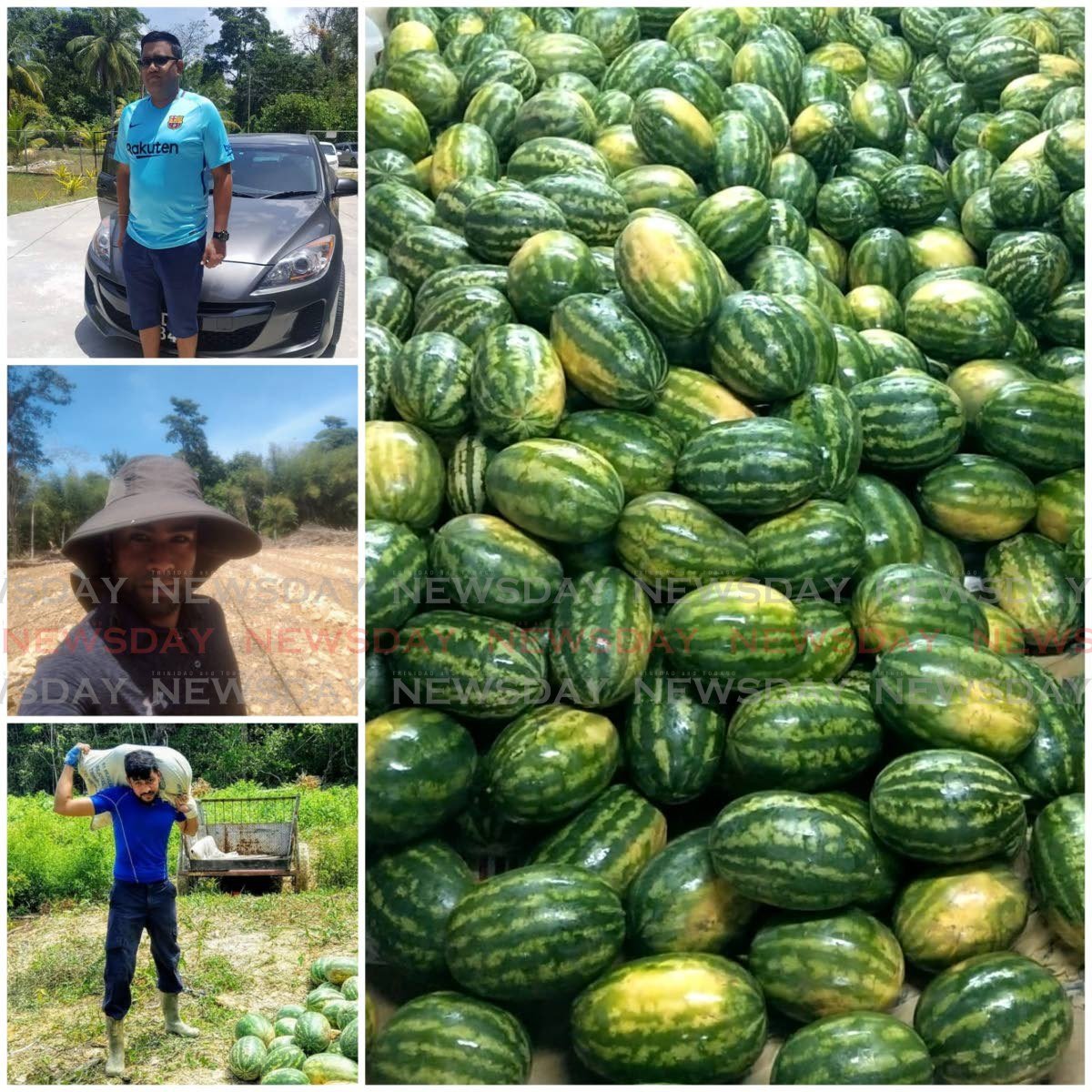 Three part-time Sangre Grande farmers give away 2,000 lbs of watermelon

Two police officers and a pilot from Sangre Grande gave away approximately 2,000 lbs of watermelon on Tuesday.

Shane Daniel, a police officer, has been attached to the crime scene investigation unit in the Eastern Division for 11 years.

When he leaves work he takes off his uniform and picks up a fork and trowel to go to his land in Vega de Oropouche to plant.

“It’s a lot of work.On my off days I go to the land. When I come home from a late shift, I go straight to the land.

“It is a lot of work and a lot of sacrifice, but it is becoming necessary for someone to have a side hustle to achieve what I want to achieve.”

He, his cousin Kerry Emamdee – also a police officer – and brother Nicholas Daniel plant watermelons, cucumbers, peppers, corn and pimento. They rotate the different crops every time they plant.

A regular watermelon crop usually produces three harvests. They had already harvested and sold out the stock twice, so they decided to give the third away.

Daniel explained, “The last one I decided to donate to charity because a lot of people are strained.”

On Monday afternoon he posted on Facebook that he had 2,000 lbs of watermelon to give away. Each watermelon weighs approximately ten pounds, so he had more than 200 watermelons to give.

Daniel gave all away within an hour.

When he made the post, he was not expecting the reaction he got. Hundreds of people from all over the country, from as far as Gasparillo and St James, contacted him asking for melons.

“The people who I did reply to, a lot of them showed up by me. I don’t have a van to do deliveries.

“In less than one hour, all were gone.

“I tried to distribute it evenly and make sure individuals did not get too much.”

Roughly 25 people from the Sangre Grande area also came to collect melons. He gave some to three NGOs, five representatives of churches, and the Toco-Sangre Grande MP’s office got some.

Daniel was blown away by the response, and wants to continue giving away his crops. For every harvest, he said he will give 25 per cent to people in need.

He also said every community should create some sort of agricultural programme where everyone can feed themselves.

“We need to be able to feed ourselves. If each community comes together and does something, even if it is teaching farming practices to the younger ones – something should be done before we starve here in the next few years.”

However, he understands donating may not be affordable for every farmer’s budget to donate.

“Sometimes when you plant you get 50 cents or $1 per lb. It’s a real big gamble.

“Farmers would not be able to do it every time, it all depends on the market and what price you get. There are a lot of variables to consider.”

As a police officer, he hopes the farming giveaway will put the police in a better light, showing that the people in the police service care about the community

“It is evident that the entire country is losing hope in the police because of the highlighted few when something bad happens, or the police do something wrong. The corruption is highlighted and the good the police is doing does not.”

Daniel has also started a neighbourhood crime watch group, with one person from each street in his area working together to keep each other safe. The group includes police officers, members of the army and teachers.

“If all the communities have the same, we may see a massive increase in crime prevention…

“I just want to let people know there are still good people out there, and especially in the police service – there are police out there who would go above and beyond to make sure the community is safe and everybody is provided for. I am not alone. There are a lot more like me out there.”