Known for having distinctive red and blue dots and covered in tiny hairs, gypsy moth caterpillars as part of a widespread outbreak have been chewing through trees and some shrubs across southern Ontario and now experts say there could once again be a record year for damage.

“Last year was the most significant outbreak of gypsy moth in the history of Ontario and it looks like this year it might do just as much if not more damage,” David Dutkiewicz, an entomology technician with the Invasive Species Centre, told Global News Wednesday afternoon.

While the Ontario Ministry of Natural Resources and Forestry data hasn’t been fully compiled for 2021, he said there were approximately 569,000 hectares of tree defoliation in 2020.

“I’m curious to see what will happen because there are so many reports of people finding gypsy moth all over their properties and just covering trees — oak, maple, aspen, and birch trees are just being stripped of their leaves right now.”

Gypsy moths, which crawl on the ground and on trees and can even travel in the air through a process called ballooning, are a little more than halfway through it and there is still another couple of weeks to go before going into the pupa stage (the last stage before emerging as moths), Dutkiewicz and other experts said.

“As these get bigger and bigger, it’s going to heat up before it calms down,” Dr. Gard W. Otis, a professor emeritus in behavioural ecology and apiculture with the University of Guelph, told Global News, adding the feeding on foliage will briefly intensify.

As the year goes on and into the summer and fall, Otis and Dutkiewicz said people will need to monitor their trees, homes and sheds for egg masses to develop. 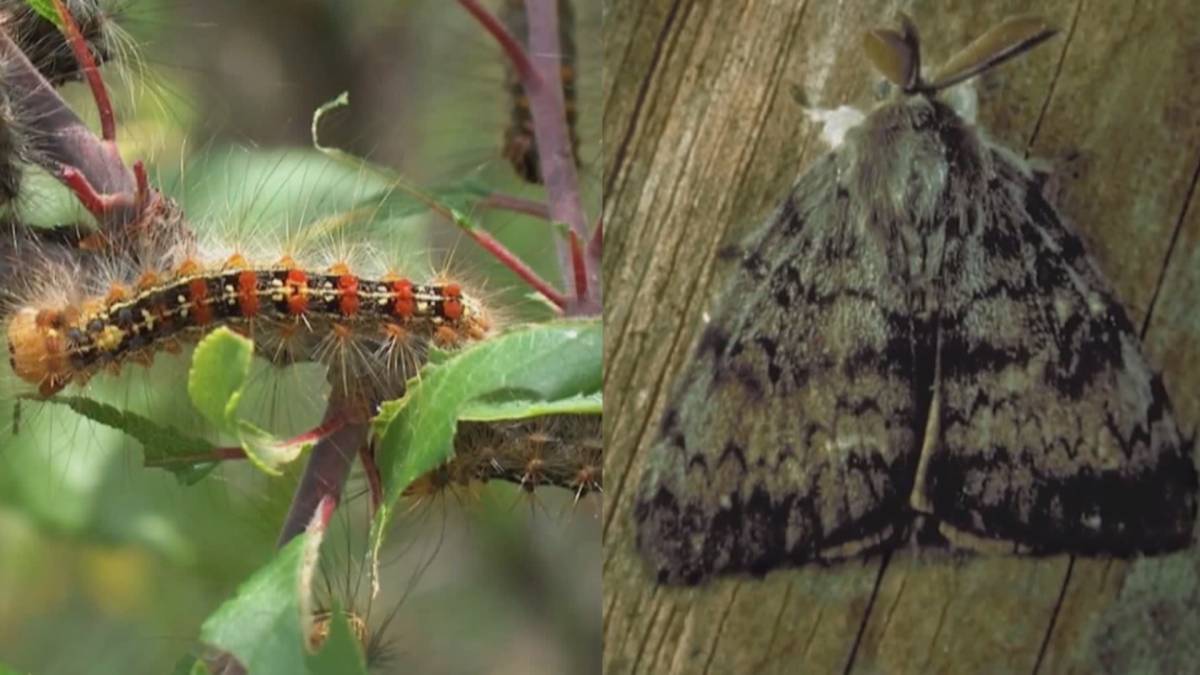 With the caterpillars and later on with the eggs, both suggested picking those off the trees and putting the bugs into soapy water (Dutkiewicz suggested at least 48 hours).

So what other solutions are available to residents?

In the Town of Newmarket, one of many municipalities battling the outbreak, Development and Infrastructure Services Commissioner Peter Noehammer told Global News municipal staff have prepared hundreds of burlap kits to wrap about tree trunks to trap caterpillars as the insects move up and down the tree. People were encouraged to use burlap with a fold over the top and to remove it, shake off any caterpillars, and put it back on the tree trunk.

Noehammer also said based on the stage of development for the caterpillars, combined with potential effects to the overall impacts to the ecosystem, aerial spraying for gypsy moths isn’t being contemplated in that municipality.

There are also biodegradable sprays that can be used to put on leaves and trees, but those won’t instantly kill the caterpillars. However, Otis cautioned against overuse of sprays and to use particular care when selecting treatments to minimize damage to other insects birds feed on. He also suggested targeting specifically the trees that people want to protect the most.

“If they don’t want to mess with nature too much, they can just let it go,” Otis said, adding healthy trees will regenerate leaves in the future and will survive the outbreak.

Can Ontario expect a repeat of this outbreak next year? The experts said we’re likely approaching the end of a multi-year peak before outbreak levels recede for several years. Dutkiewicz and Otis pointed to a natural virus (MPV) that increases among the gypsy moth population as the population itself increases. Dutkiewicz said the gypsy moth population, based on early, limited evidence, could collapse within one to three years.

Over 500 kits were given out today at our Free Burlap Giveaway to help trap Lymantria dispar dispar (LDD) – gypsy moth caterpillars. Due to the overwhelming interest, we have run out of kits for the day. We apologize for the inconvenience. The giveaway will resume tomorrow! https://t.co/MQ0qhXx1sg

Yes, the ground is moving! This video was taken at Barrie Union cemetery a kilometre away from home. The Gypsy moth caterpillar infestation has been brutal this year. The oaks and maples are being stripped bare. pic.twitter.com/YAJiQd8n8A