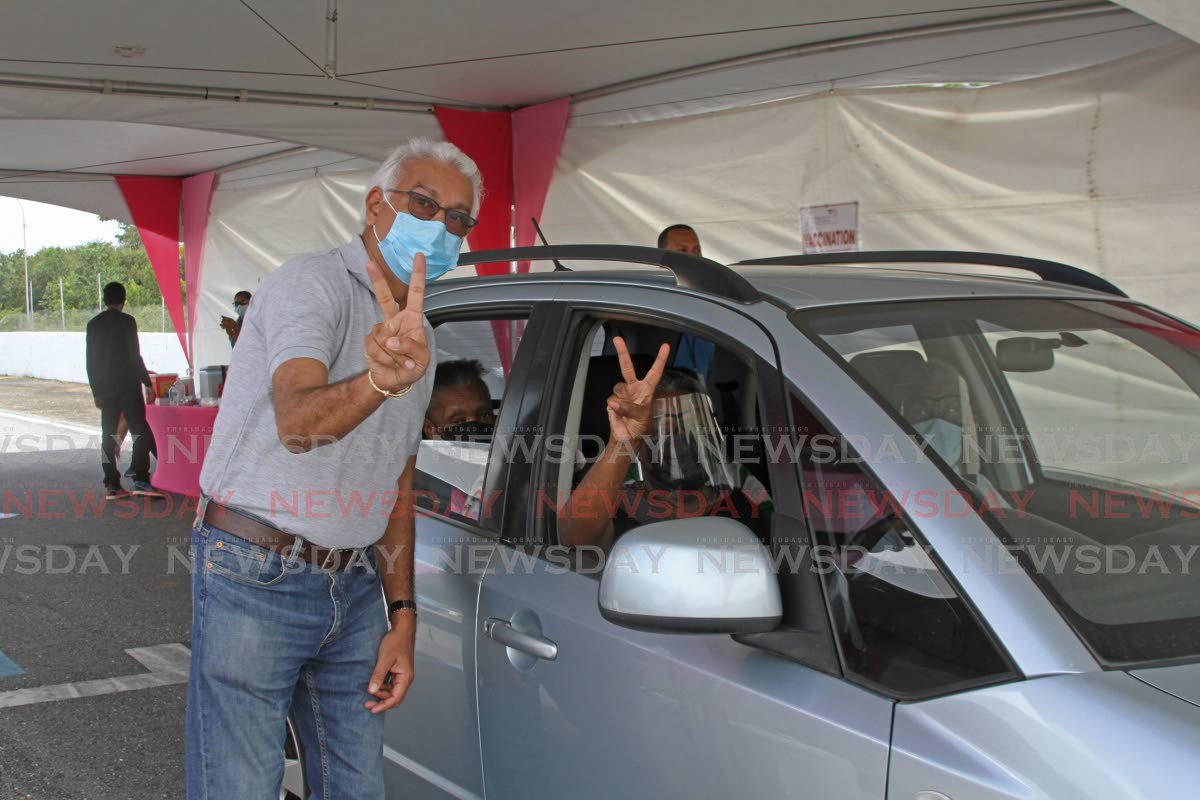 “We had 200 cars pass through, which is approximately 1,000 people. The response by the public has been overwhelming and it has been excellent.”

However, based on vial counts, healthcare workers at the site said approximately 300 people had been vaccinated between 8 am and 10 am. They said cars came with anywhere between one to four people.

North Central Regional Health Authority (NCRHA) CEO Davlin Thomas said there were people lined up at the gate at 7 am, although the site did not open until 8 am.

“We had about 100 cars initially. Once we started, each vehicle would have spent about half an hour in the system. There’s an observation area post-vaccination, though we haven’t had any adverse reactions.

“The cars were at various stages in the flow, and because we had the space we were able to space them out. It went pretty smoothly. Some people stopped and had corn soup in the interim. It was a remarkable effort by staff and we applaud them.”

“We are reaching the right target audience with the right message, so people are responding. What we are doing this morning is to offer on another delivery option in addition to 109 health centres, 11 mass vaccination sites, doctors in the private sector, and an option where people aren’t coming out of their comfort zone – come out of their cars, they stay in one entity and drive through the process.”

He said the number of people who had been vaccinated was an excellent return.

“We look forward to seeing what the data looks like, to see if this is a model we have to do more of, and how we tweak the system going forward to make it more accessible and convenient to the population.”

He said if the public responds, a further 400,000 people can be vaccinated by the end of September. He said this depends on the population coming out to be vaccinated.

“We are making it easy, we are communicating and giving you all the information, but now the population has to make the final step to come and get vaccinated. We continue to urge people to get vaccinated, it could save your life, it could prevent you from getting into an ICU, and you owe it to your family, your children, to get vaccinated. Don’t wait until you are an unfortunate statistic.”

He said if the Delta variant was to arrive in TT, the government would ensure that measures such as heightened contact tracing and surveillance would take place. He said the possibility of the variant arriving in TT made getting vaccinated even more of a priority.

“Before this massive drive, the onus was on the government to do things – to lock down, which is not sustainable, etc. Now that onus has shifted dramatically to the population. All the evidence says a vaccinated population is your best weapon against variants, including the Delta, in addition to wearing your mask, washing your hands, and social distancing.

“The international evidence shows that the vast majority of people who are succumbing to the disease now are the unvaccinated.”

Deyalsingh said he was pleased to see there was no rush when the food sector reopened on Monday.

He said the majority of the population being vaccinated was important in order to protect those who could not be vaccinated, whether for medical or religious reasons, or because they are too young to take the vaccine.

Deyalsingh said he had spoken with the Education Minister about vaccinating children if and when the Pfizer vaccine is obtained.

“We will have to get parental consent to vaccinate children. The Education Ministry has their own medical unit, and they will operationalise that, but it will be based on parental consent.”

Vehicles were seen entering the compound slowly but steadily. Upon arriving at the site, people’s temperatures were taken at the gate.

At a third tent, they were counselled about the signs of adverse reactions and what to do if they experienced these, as well as the side effects they could expect. The vaccine was then administered and they were directed to an observation area where they waited for 15 minutes. Their vaccination cards were stamped and a date for their second shot was given, if they were receiving their first shot.

Each tent had four stations set up, so that the occupants of four cars could be dealt with at the same time. A single vehicle could have one or multiple occupants.