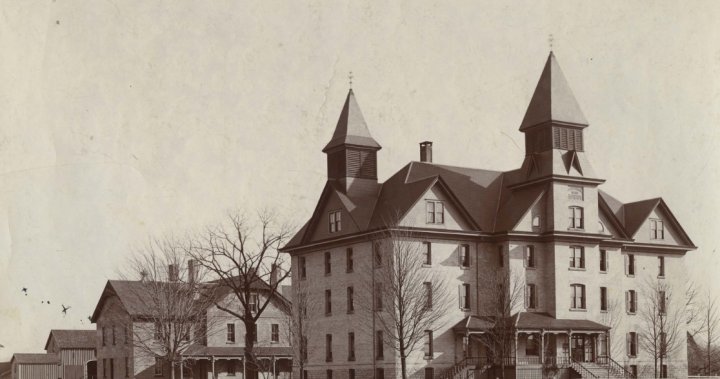 On the inaugural National Day for Truth and Reconciliation, Chippewa of the Thames First Nation has announced plans to search the grounds of the former Mount Elgin Residential School in southwestern Ontario this fall.

In May, the remains of 215 children were found buried in unmarked graves on the site of the former Kamloops Indian Residential School in British Columbia.

In the weeks and months that followed, several other Fire Nations across Canada reported the uncovering of more than 1,300 unmarked graves on the grounds of former residential schools.

The initial discovery at Kamloops led to calls for investigations on the grounds of all residential school sites across the county.

In a video posted online, Kelly Riley, the treaty research co-ordinator at Chippewa of the Thames First Nation, told viewers the first step is research to find out who the students were and if there is the potential for unmarked graves.

“It has been 80 years since this school was in operation. The First Nations out west, such as Kamloops, the school was still standing, and pretty much everyone knew where the unmarked burial sites were,” said Riley.

“We have a very difficult task in that we have very few survivors of Mount Elgin Residential School.”

Sept. 30 is also the annual Orange Shirt Day, where people wear an orange shirt to honour the survivors of Canada’s residential school system, as well as the thousands of Indigenous children who never made it home.

During its almost 100 years of operation, Riley said children from 21 First Nations, including Chippewa of the Thames, attended the school. He said they have reached out to all of the communities that had children at the school.

Chippewa is working to identify every student who attended the school and create a timeline of its years of operation.

After the research is complete, Riley said if it’s determined there is evidence there could be unmarked graves, they will use all of the technology and equipment needed, such as ground-penetrating radar, to search the grounds.

This fall they will be doing several walks throughout the grounds and also using a drone to get area footage to try and find any possible unmarked burial sites.

Riley estimates it will take between three and five years before they are finished.

“That might be one of the end goals, to reach a point in time, using the best resources available, to put to rest the rumours, some of the oral history going on in the community, and in some cases, certainty close the chapter in the book of the Mount Elgin Institute.”

The Truth and Reconciliation Commission (TRC) reports that 139 residential schools operated in Canada between 1828 and 1996, 17 of which were in Ontario.

The TRC identified 3,200 deaths as part of its investigation, but Indigenous groups across Canada have long insisted that number is much higher.

Children at residential schools were the victims of both physical and sexual abuse by staff, were malnourished or underfed, and lived in poor housing conditions that threatened their safety, the TRC reports.

In early August, the Canadian government pledged $321 million in new funding for programs to help Indigenous communities search burial sites at former residential schools. The money would also go towards supporting survivors and their communities, the government said at the time, and a special interlocutor would be appointed to help with this work.

“All of these schools, whether it’s Elgin or Mohawk, everyone suspects there is a lot more than what’s actually recorded,” Joel Abram, grand chief of the Association of Iroquois and Allied Indians, said during an interview with Global News in June.

The Indian Residential Schools Crisis Line (1-866-925-4419) is available 24 hours a day for anyone experiencing pain or distress as a result of their residential school experience.

—with files from Rachel Gilmore and Andrew Graham