No one in charge as court rules both Griffith, Jacob appointments illegal 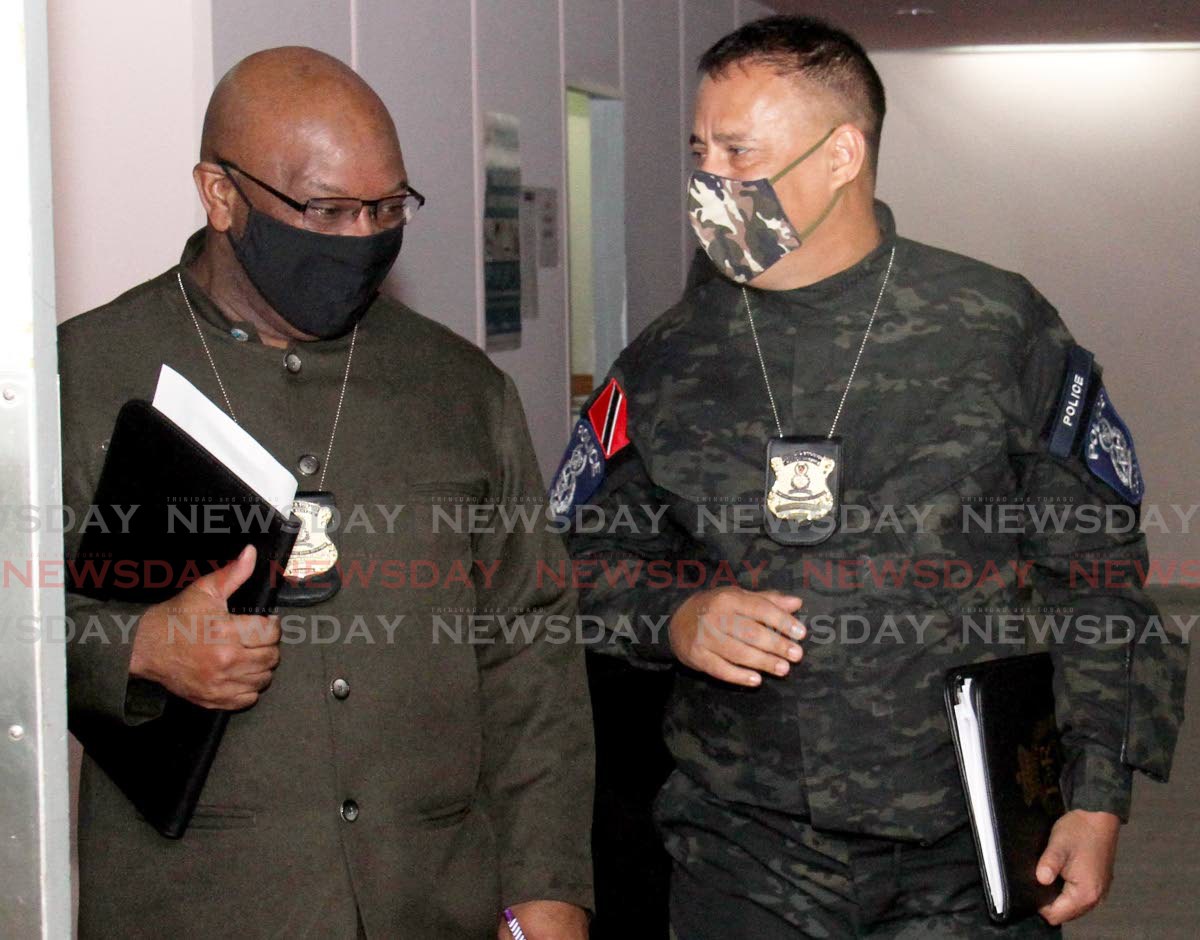 No one in charge as court rules both Griffith, Jacob appointments illegal

AS of midnight, the country will, for the first time since Independence, be without a commissioner of police at the helm of the police service.

She also held the two legal notices which gave effect to both men’s acting appointments were also unlawful and void.

The situation can put the police service in a tailspin as there must be a top cop to sign off on the provision of goods and services to keep the organisation running.

Legal Notice 103 of 2009 gave the PSC the power to appoint a deputy commissioner to act as commissioner while Legal Notice 183 of 2021 allowed for someone who was on contract, or whose contract ended, to be appointed.

However, the judge held before any acting appointment can be made the process set out by section 123 of the Constitution must be followed by the PSC by sending a list of nominees to the President to be sent to the Parliament for approval.

She said it was more likely than not that the framers of the Constitution envisaged that any appointment to the most senior office of the police service should be subjected to the healthy process of parliamentary debate.

“On a true construction, the procedure under section 123 of the Constitution for appointment for commissioner and deputy applies to both (acting and substantive) appointments.”

Kangaloo was ruling on an interpretation claim by social activist Ravi Balgobin Maharaj who was successful in getting the court to declare that Griffith’s appointment to act as commissioner was illegal and unconstitutional as it did not follow the procedure set out by the Constitution for such appointments.

Griffith was on leave as acting commissioner and had challenged the PSC’s decision to suspend him on September 17. However, with the court’s ruling that his short stint as acting commissioner was unlawful, not only does his lawsuit fall by the wayside but he will not return to the helm of the police service.

And, with Jacob’s equally short stint as acting top cop expiring by midnight, the police service will remain without a leader because there is no PSC to nominate anyone for the position.

Kangaloo said she left those issues “up to the powers that be.”

The previous PSC which made the now controversial appointments collapsed last month with the resignations of its three members and its chairman, Bliss Seepersad.

Two new nominees – retired judge Judith Jones and management consultant Maxine Attong – have been forwarded by President Paula-Mae Weekes to the Parliament for approval, but it is not certain when the Parliament will meet to debate the nominations to the PSC.

However, a third nomination is required as the commission needs a minimum of three members for a quorum.

On October 1, the Prime Minister dismissed claims of a constitutional crisis after the collapse of the PSC.

“I have seen a lot of people, I don’t want to say overreacting but, responding to the fact that there isn’t a commission and there isn’t a police commissioner. Understand that the police service is a paramilitary organisation that has rank and responsibility.

Dr Rowley said the only thing that will not function as normal was the granting of firearm user’s licences as only a commissioner can sign those.

“Other than that, the police service is functioning and waiting for the filling of that vacancy and we, as a country, are waiting for the replacement of those people who have left the service commission and I don’t think we should get overly excited about that.

Griffith’s suspension, which the former PSC had conceded was unlawful, related to investigations into the issuance of FULs and possible interference in a criminal investigation against Christian Chandler, the head of the police service legal unit.

In his interpretation claim, Maharaj had asked the court to determine if the PSC was required to send a list to the President of nominees for the acting commissioner’s position; should it have gone to the House of Representatives for approval and should it have only been done after the Parliament approved Griffith’s nomination.

Kangaloo ruled that section 123 of the Constitution was clear as it related to both acting and substantive appointments.

Maharaj had also asked for declarations based on the concerns he has raised, and to declare that Griffith’s appointment to act as commissioner is illegal and unconstitutional based on the procedure to be adopted to appoint an acting top cop. These declarations were granted.

He was represented by a team of attorneys led by Anand Ramlogan SC, and includes Renuka Rambhajan, Jayanti Lutchmedial, Jared Jagroo, Natasha Bisram and Vishaal Siewsaran.

Judge: Who is going to guard these guards

The judge began and ended her ruling with the late veteran calypsonian King Austin’s Who Will Guard the Guards.

“Who is going to guard these guards?”

She said the interpretation claim and Maharaj’s concerns were of great constitutional and public importance, but straightforward as all the court had to do was interpret the legislation and give effect to the true meaning of the Parliament.

It was argued by Ramlogan and lead counsel for the Attorney General, Douglas Mendes SC, that Griffith’s appointment as acting commissioner was not in accordance with section 123(4) of the Constitution as no recommendations were sent to the President for issuance to the Parliament for approval.

In an affidavit before the court, the deputy Director of Personnel Administration Corey Harrison supplied two letters from Seepersad and the President relating to the acting appointment of a commissioner.

Griffith and Jacob’s names were on that list but, in her reply to Seepersad on the two names for the acting position,Weekes said while it raised “immediate concern,” it did not confer on her any role, function, power, or authority other than to receive the list.

She also said the notice provided no guidance to her on what she was supposed to do with the two names on the list.

Newsday understands that the Office of the President intends to, within days, release a full statement on the issues surrounding the controversy and collapse of the PSC.

Although Maharaj’s original claim did not challenge the 2009 order which gave effect to Jacob’s appointment, it was raised by the Attorney General’s legal team which submitted both orders must be declared invalid as the PSC was expected to act responsibly.

Attorneys for Griffith and the PSC, who were deemed interested parties by the judge, argued that the former top cop’s appointment was proper. The PSC’s lead counsel Russell Martineau SC, had maintained the commission had the power to regulate its affairs, the acting appointment was valid and the PSC followed the procedure set out by law.

Griffith’s attorney Larry Lalla, who agreed with the PSC’s position, said the legislature recognised it was important for there to be someone in the office of commissioner at all times. He said administrative efficiency and continuity were important and maintained that the PSC acted reasonably when they appointed Griffith to act.

Kangaloo pointed out that anyone who acts as commissioner had the same powers as the substantive office holder, and that the PSC had the power to appoint someone to hold the office, or act, but had to submit names to the President for the House of Representatives to approve.

She said it made for a seamless process for the appointment of both substantive and acting positions.

She also said the fact that in the past, there were acting appointments without the Parliament’s approval, did not mean that the process set out under the Constitution did not apply.

She also said Hansard – the official report of the Parliament – also favoured the position put forward by Ramlogan in his arguments.

At Thursday’s virtual reading out of the court’s ruling, Griffith was present as well as representatives from the Office of the Prime Minister, the Parliament, the police service as well as the Chief Justice.

The imbroglio involving Griffith’s now-illegal appointment, the collapse of the PSC, has also led to calls from numerous quarters for the President to speak out on the issue.

Her office has remained silent on these calls both for her to clear the air on who she met with on August 12, what information she received that led to the revocation of the Order of Merit list for the substantive post, and her stepping down as head of state.

In an immediate response, Maharaj said the court’s ruling was “bitter sweet.”

“This current crisis is entirely the fault of the PNM government who allowed the tenure of Mr Griffith to run its entire course before attending to the mandatory process that is required for appointing his successor.

“But much worse than that,” he said, was that Al-Rawi was informed of that fact but opted to defend the unconstitutional action.

He accused Al-Rawi of “manufacturing the crisis TT now finds itself and should be forced to resign for the role that he played, as well as vulnerability he now creates in the Government.

IT IS HEREBY ORDERED that:

2) It is declared that the appointment of Mr Gary Griffith to act as Commissioner of Police from 18th August, 2021 is void and unconstitutional as being contrary to Section 123 of the Constitution.