Two suspected Hamilton-area cases of the new Omicron COVID-19 variant are being investigated by the local and provincial public health agencies, according to Ontario’s top doc.

The two Hamilton residents under the probe recently returned from South Africa, tested positive for COVID-19 and are awaiting results of genome sequencing related to the Omicron variant.

“So the two individuals tested positive for COVID 19, we don’t know yet what variant they are, if any,” said Michelle Baird, Hamilton’s director of epidemiology, wellness and communicable disease.

“They did travel to South Africa, so right now, they’re being investigated because they were COVID 19 positive and they had a travel history.”

City health officials are urging anyone who travelled to Botswana, Eswatini, Lesotho, Mozambique, Namibia Nigeria, South Africa, and Zimbabwe within 14 days before arriving in Hamilton to self-isolate, even if vaccinated.

It’s also recommending travelers to get tested for COVID-19 at a local assessment centre, regardless of whether they have symptoms.

Baird told 900 CHML’s Hamilton Today that not much is known at this juncture how many people are becoming infected with the variant in Africa and worldwide.

She says public health are being cautious with the Hamilton travellers after learning about the emerging science of Omicron last week and that it’s not yet known when confirmation of the genome sequencing test will be revealed.

“It normally takes about seven to 10 business days. I’m not sure where we are in the process,” Baird said.

“I can’t say for sure when they’ll come back or if perhaps we’ll get them sooner. But at this point, the two individuals, of course, are at home and they’re isolating and as well their contacts.”

The two Ottawa cases were tied to people who had recently been in Nigeria and were first tested for the virus in Montreal when they arrived in Canada.

“Their local public health agencies have been … informed by Public Health Agency of Canada … and are doing active case and contact management,” said Moore.

He went on to say the regional public health units were reaching out to 375 people who returned from countries the federal government deems to be a high risk for the new variant and are offering testing.

With international flights returning to Hamilton this week, after Transport Canada lifted a hold on passenger travel from John C. Munro airport, Moore admitted the situation is currently “fluid” and said public health would be reaching out to the federal government for a testing strategy.

“We were certainly in contact with them all weekend to talk about a testing strategy for all travellers returning to Canada,” Moore said.

“We will further review the testing strategy for the short term, travel for 72 hours or less.”

It’s expected the province will offer testing to all returning travellers, not just those from the seven designated countries in southern Africa.

Moore told Ontarians to “remain calm,” saying he doesn’t see a change in any restrictions at the moment.

He said if Omicron is “less lethal,” then it will have a lesser impact on the province’s health system.

“I don’t have a complete crystal ball, but we’ll have greater clarity in the coming weeks of how, as a province, we would have to respond to this new threat,” Moore said. 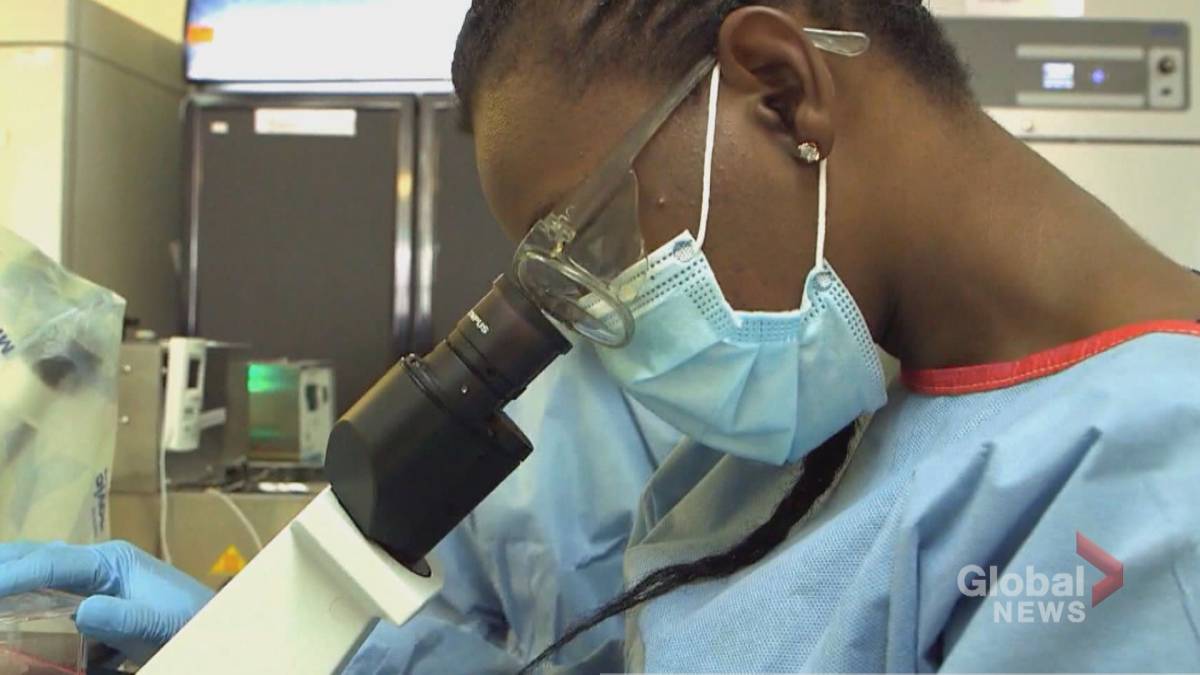 The province is likely to have an announcement later this week in regards to vaccinations and expanding third dose availability.

He said an “accelerated third dose strategy” would be part of the new measures the province could introduce as a way to fight the new variant.

Dr. Colin Furness, an epidemiologist and assistant professor with the University of Toronto, says the concern over the new version of the COVID-19 virus is that it is “successfully” competing with current variants through a mutation with spike proteins.

“The problem with mutations on the spike is that the vaccine teaches our immune system to recognize that spike and too many mutations makes it harder to do so,” Furness told 900 CHML’s Good Morning Hamilton.

“You may remember the Pfizer vaccine was originally 95 per cent effective against COVID, and by the time we got to Delta, it had dropped to 88 per cent. So it could drop a little bit more.”

The researcher says the next steps for health communities around the world will be to complete lab studies testing how effective the current vaccines are against Omicron, and measure how much it’s spreading in the community.

“With the variants that we’ve seen so far, we’ve known what the pattern looks like. They start small, then all of a sudden they’re dominant,” said Furness.

“So we’ll have to wait and see if this is that, too, and then watch for the symptoms.”

Hamilton public health reported 57 new COVID-19 cases over the weekend and a drop in active cases from Friday.

The city’s seven-day average case rate has dropped slightly in the last few days, checking in at 21 on Monday compared with Friday’s average of 22 per day.

So far, for all of November, the city has an average case rate of 20 per day, slightly lower than the 22 cases per day reported in October.

The city’s per cent positivity rate – representing the number of tests returning positive from labs – remains at 2.4 per cent, lower than the provincial average of 3.5 per cent reported on Monday.

Since the pandemic started in March 2020, Hamilton has reported 25,766 COVID cases.

There are eight reported ongoing outbreaks tied to 39 total cases across the city as of Nov. 29. The largest is at St. Gabriel Catholic Elementary School, which has 14 total cases  — one among staff and 13 among students.

As of Monday, there are six ongoing school outbreaks connected to 25 total cases.

In the last 14 days, both public boards combined have reported 66 cases, with 50 among students.

Hospitals in Hamilton are reporting a total of 14 COVID-19 patients as of Thursday, nine at Hamilton Health Sciences and five at St. Joe’s.

Currently, the city is averaging less than one new hospital admission each day.

Over 83% of eligible Hamiltonians 12-plus fully vaccinated

Over the weekend, Hamilton’s health partners administered over 6,130 vaccine doses, with Friday recording the largest intake over the week — 2,813 shots.

With a COVID-19 vaccine becoming available to kids aged 5 through 11, the city saw a 56.7 per cent increase in doses administered week over week.

That’s more than the daily average recorded for October – 1,068 per day.

Public health estimates that about 17 per cent of the city’s 42,000 children, eligible for a shot, have been scheduled into the city’s VERTO booking system as of Monday.

As of Sunday, 83.3 per cent of eligible Hamiltonians over the age of 12 have been fully vaccinated while 86.7 per cent have had at least a single dose. The city is still behind the provincial average, which has 86.3 per cent fully vaccinated and 89.7 with at least one vaccine dose.

Residents aged 70 to 84 have reached the Ministry of Health’s target of 90 per cent first and second dose coverage. Meanwhile, Hamiltonians aged 25 to 29 represent the lowest vaccination rates of those eligible in the community at just over 73 per cent fully vaccinated.

Hamilton is behind 31 other public health units in the percentage of two-dose vaccinations in Ontario.