Hamilton’s seven-day average number of deaths connected with COVID-19 has been increasing in recent weeks amid a pandemic wave spurred on by the Omicron variant.

The last time Hamilton faced similar numbers was during the third wave of the pandemic almost exactly a year ago, when the average hit 3.14 on Jan. 15, 2021.

The city’s medical officer of health says the numbers are being watched “very closely” and compared with the number of cases currently affecting the surrounding community.

“We hate to talk about any of these things from a statistical standpoint. These are … people who had families who were loved and who are grieving their loss very much as we go forward,” Richardson said.

“So we’ll continue to look for any trends, anything that can help us to improve the response that we’re doing as they go through that review,”

Richardson says the city is awaiting a “larger scale review” from the province tracking patterns across Ontario that tie hospitalizations to ICU admissions and ultimately the reported deaths.

So far the city has had 35 COVID-related deaths in the first three weeks in January.

The seven-day average dropped to 1.86 infection-related deaths as of Saturday.

Excluding kids aged five to 11, Hamiltonians in the 12-to-17 age group represent the lowest vaccination rates of those eligible in the community at just over 80 per cent having had a pair of doses.

Over 280 people are currently hospitalized in the city for COVID as of Jan. 24 with most, 209, housed at a Hamilton Health Sciences (HHS) facility.

As of Monday, HHS and St. Joe’s say they have a combined 35 patients in ICUs with 15 originally hospitalized specifically for COVID. 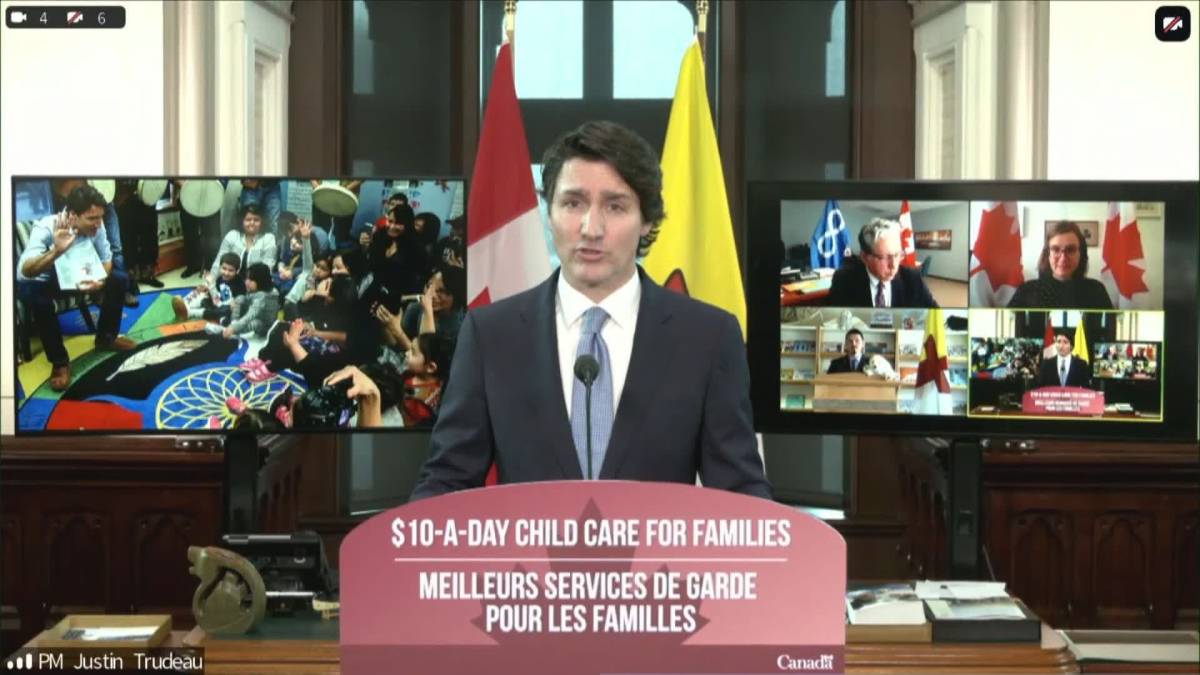 2:11Ontario now the only province or territory without a child-care deal with Ottawa

Richardson says public health is seeing some indications that Hamilton may have hit the peak of the Omicron wave with a decrease in the percent positivity data of those being tested by PCR.

The rate dropped to 26.8 on Monday compared to the 31.4 that was recorded for all of last week.

Another sign could be the number of hospital outbreaks declared over late last week: two at the Juravinski, two at the general, and a pair at St. Joe’s Charlton campus.

3,861 people in Ontario hospitals with COVID, 615 in intensive care

The number of overall institutional COVID-19 outbreaks in Hamilton continues to decline with 80 as of Sunday connected to close to 1,400 total cases. Ten days ago the city had over 100 surges involving close 1,100 cases.

More than 800 people are connected to 38 surges in homes containing seniors as of Monday.

Over half of the combined 803 cases are with health-care workers, about 300 in LTCHs.

The city’s largest outbreak is in the primary jail, the Hamilton-Wentworth Detention Centre, with 81 reported cases as of Jan. 24.

Just over 50 of those cases are tied to inmates.

The outbreak numbers potentially represent only part of the picture in the city since public health stopped reporting COVID-19 outbreaks in workplaces not tied to high-risk settings like hospitals and congregate settings.

There are eight surges tied to about 200 cases in the city’s shelter system while about 131 are connected congregate setting in 16 support homes.

Over 87% of eligible Hamiltonians 12-plus fully vaccinated

Hamilton’s MOH says increased COVID vaccination rates in some central Hamilton neighbourhoods struggling with uptake has been a good news story for public health of late.

Meanwhile, a shift by health-care partners in late summer connecting residents with pop-up and mobile clinics has helped some central and eastern neighbourhoods.

Dr. Richardson says Crown Point was one forward sorting area (FSA) that saw results with first-dose coverage increasing over 16 per cent since the start of August, and two-dose coverage spiking 25 per cent in just under five months.

Combined, those regions also saw over 80 per cent of residents aged 12 and over get a pair of doses.

Over 81.3 per cent of eligible Hamiltonians aged five and up have had a pair of doses, while 86.4 per cent have gotten at least one shot.

About 87 per cent of residents aged 12-plus have had at least two shots, while about 89.7 per cent have had a first dose.

The city is still behind the provincial average, which has 88.9 per cent of those 12-plus with two doses and 91.6 per cent with a single dose.

Excluding kids aged five to 11, Hamiltonians in the 12-to-17 age group represent the lowest vaccination rates of those eligible in all communities.

Just over 80 per cent have had two shots.