Ontario motorists in need of a fill up at the pumps may want to top up the tank sooner rather than later, with gas prices expected to rise another two cents overnight Friday, hitting all-time highs in most major cities in the province, according to one gas analyst.

Dan McTeague, president of Canadians for Affordable Energy, says gas prices are expected to hit records of 151.9 in the GTHA on Friday, and 150.9 in other locales including Barrie, London, Niagara, Ottawa, St. Catharines, Waterloo, and Windsor.

The increase comes after a similar two-cent jump on Thursday. Prices are expected to rise further by a penny on Saturday, he says.

“We’re into new territory, unknown territory,” McTeague told 980 CFPL’s Mike Stubbs on Thursday. It marks the first time the cost of gas has risen above the $1.50 mark in London.

“I guess the factors behind it are many, but suffice it to say that this is really a glimpse of what’s to come as we speed towards $1.60, even $1.64, $1.65 come the first days of summer, the last days of spring, depending on how you look at it.”

The price jump at the pump comes as Ontarians are already feeling the pinch to their pocketbook in other ways, such as at the grocery store and in housing. The consumer price index rose 4.8 per cent in the final month of 2021, its highest rate of increase since 1992, Statistics Canada reported last week.

The March crude oil contract hit US$88.54 per barrel on Wednesday, a more than seven-year high, before falling 74 cents on Thursday to US$86.61.

The rising cost of crude is being driven in part by decreased oil inventories and an announcement that OPEC+ will maintain current oil production targets, according to University of Calgary’s School of Public Policy.

“The world is suddenly realizing after several months that we are short of supply of oil, and producers are not coming to the rescue,” McTeague said.

“I suspect that we’re going to see oil go to $100 a barrel, and it will be, of course, helped by the standoff in geopolitical tension that we’re seeing between Russia and Ukraine and other parts of the world.”

McTeague forecasts that such a price for oil would translate to an additional 14 cents per litre at the pump from where things are expected to be on Friday.

“Then we have the federal government’s ever increasing carbon tax, the first one that goes up two-and-a-half cents a litre on April 1… and then the switch over on April 15 from winter to summer gasoline,” he continued.

The weak performance of the Canadian loonie versus the U.S. dollar also isn’t helping things either, he says.

“In the past, when we saw oil surging ahead, the Canadian dollar would also strengthen relative versus the U.S. dollar. It’s not doing that this time,” McTeague said.

The Canadian dollar traded for 78.67 cents U.S. on Thursday compared with 79.33 cents on Wednesday.

— with files from Craig Lord and The Canadian Press 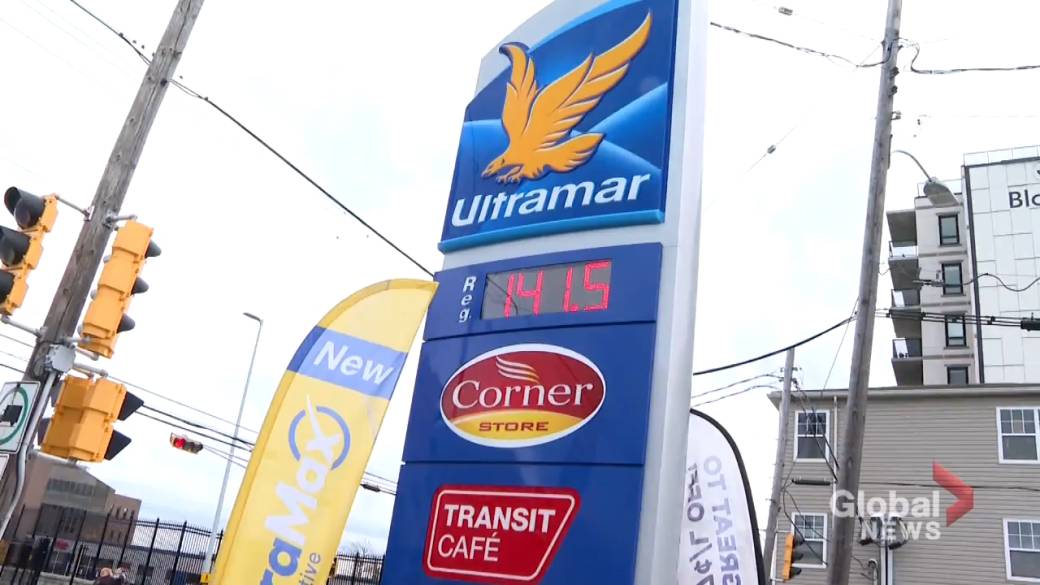 2:00No end in sight for high gas and food prices