The Ambassador Bridge land border crossing that connects Windsor, Ont., and Detroit is “not accessible,” police say, as protesters demonstrating in solidarity with the ongoing anti-mandate protests in Ottawa are blocking traffic.

In a notice Monday evening, the Ontario Provincial Police’s Essex County detachment said as of approximately 8 p.m., the Ambassador Bridge is “not accessible in both directions going into the United States as well as entering into Canada.”

The force said those looking to travel into the United States should utilize the Bluewater Bridge in Sarnia.

“Police are asking people to avoid the area, if possible,” the notice reads. “Updates will be provided as they become available.”

In an email to Global News earlier on Monday evening, the Canada Border Services Agency (CBSA) confirmed that demonstrations were “contributing to significant border wait times” at the bridge.

Initially, the CBSA website said wait times at the bridge could be up to four hours, but by 10 p.m., the agency said the bridge was “temporarily closed.”

Huron Church Rd. closed off bet. College & Tecumseh Rd W. for all traffic. Avoid the area. We urge those involved not to endanger members of the public, jeopardize public peace or participate in illegal events. Those found committing crimes will be investigated & charged. dg12833 pic.twitter.com/DZDwY69gDs

“Anticipate travel delays,” the force said in a tweet. “Officers will be in the area to address traffic issues.”

Just after 8 p.m., the force said Huron Church Road was closed to all traffic between College Avenue and Tecumseh Road West.

“Avoid the area,” the tweet reads. “We urge those involved not to endanger members of the public, jeopardize public peace or participate in illegal events.”

The protest in Windsor comes after solidarity demonstrations were held in cities across the country over the weekend.

In Toronto, two men were arrested on Saturday in connection with the protests.

Meanwhile, crowds of protesters have remained in Ottawa for more than a week, blocking traffic and camping out the city’s downtown core.

Hundreds of tickets have been issued, and Ottawa Police say dozens of criminal investigations have been launched.

The demonstrations, initially aimed at denouncing vaccine mandates for truck drivers crossing the Canada-U.S. border, has since morphed into a protest against a variety of COVID-19 restrictions and the federal government. 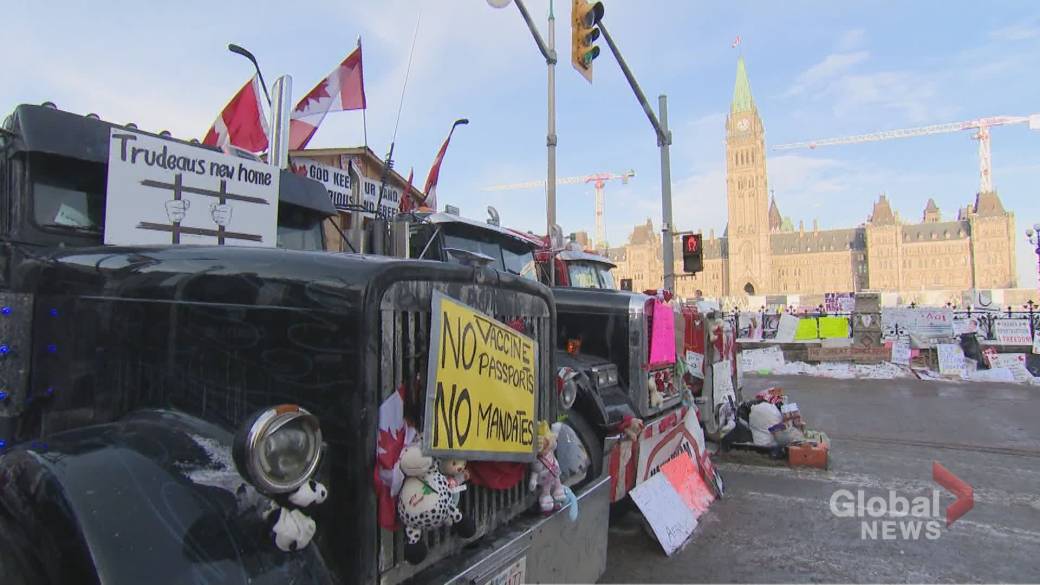 In Windsor, police said anyone “found committing crimes will be investigated and charged.”

Global News reached out to Windsor Police to determine if any tickets had been issued, or if any arrests had been made, but did not hear back by time of publication.