An action committee formed by Western University has submitted a set of interim recommendations aimed at tackling gender-based and sexual violence at the London, Ont., post-secondary institution.

The Action Committee on Gender-Based and Sexual Violence (ACGBSV) was created in October 2021, about a month after roughly 9,000 Western students had walked out of class to protest what they call a “culture of misogyny” on campus.

The massive walkout came in the wake of a series of allegations of sexual assault at Western, including reports on social media suggesting the alleged assaults happened in on-campus housing. 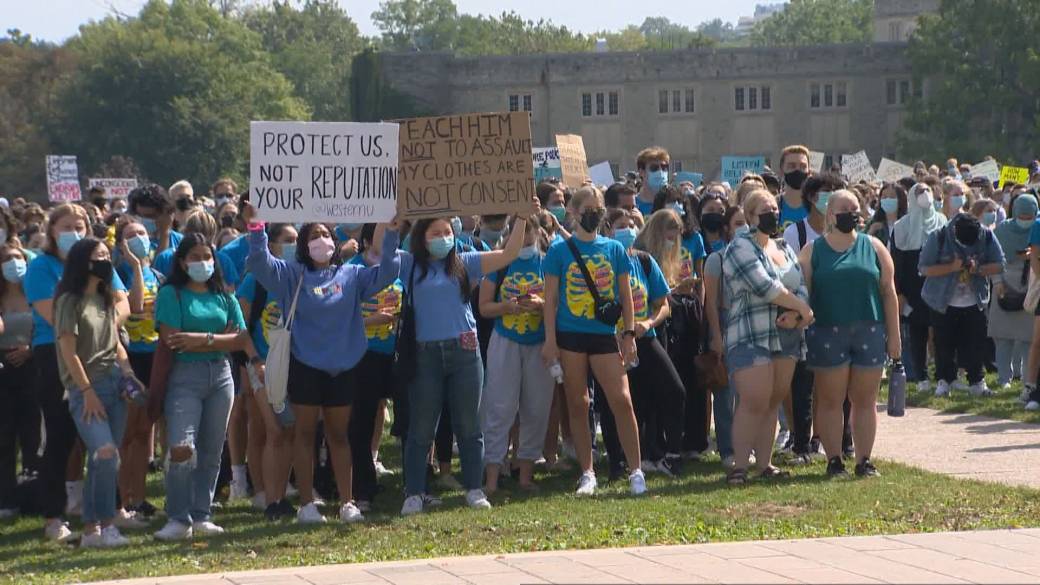 The ACGBSV began meeting in November with the goal of studying the issue of gender-based and sexual violence at Western and “changing the culture” at the university.

The committee’s members bring with them a wide range of expertise and include student representatives, the executive director of Anova, an investigative staff sergeant with the Western Special Constable Service and a number of researchers.

A final report of the committee’s findings and recommendations is expected in late March or early April, but in the meantime, four interim recommendations have been shared with Western and the public.

The first recommendation asks Western to “prepare students and parents/caregivers for transition to campus.”

The committee asks that Western make this group aware of the schools’ values and stance on gender-based and sexual violence before they arrive on campus. This can be done by adding content to admission letters that indicate expectations for students.

New students should be required to complete relevant training prior to their campus arrival and be provided a structure to allow for continued learning throughout the school year.

This recommendation also wants Western to provide free menstrual products in all campus washrooms in an effort to demonstrate the university’s stance on gender inclusivity.

The second recommendation asks that Western develop a new process for the hiring and training of Sophs and others in similar roles. Sophs refers to upper-year students who are tasked with providing guidance and peer mentorship to students navigating their first year at Western.

The new process would be built on a collaborative foundation that consults with experts in the field of gender-based and sexual violence.

The committee wants this addition to be reviewed and further developed “to ensure adequate resources are in place to support the 24/7 demands of on-campus residences.”

The fourth and final recommendation asks that Western hire at least one additional support case manager and one additional prevention and education coordinator who both specialize in gender-based and sexual violence.

The committee says that this will bring Western in line with other post-secondary institutions, adding that “Western is significantly under-resourced, compared to comparator universities.”

In a statement to Global News, Western’s acting president, Sarah Prichard, said she welcomes the recommendations and looks forward to implementing them.

“These interim recommendations will take us another significant stride forward before the fall 2022 term.”