COVID-19: Resumption of some non-urgent surgeries likely ‘weeks away’, according to Hamilton hospitals – Hamilton

COVID-19: Resumption of some non-urgent surgeries likely ‘weeks away’, according to Hamilton hospitals – Hamilton

Executives from Hamilton’s two hospital networks reiterated that their facilities are not quite ready to resume non-urgent surgeries as of Monday due to ongoing pressures from the current COVID-19 wave fuelled by the Omicron variant.

“Hospitals in Hamilton will proceed cautiously with ramp up plans, although frankly I can’t see ramping up happening in a significant way for at least a few weeks,” MacIsaac said in city-led pandemic update on Feb. 7.

“We need to be confident that we can maintain access to urgent and emergent services.”

The HHS boss revealed the network’s overall adult intensive care unit (ICU) occupancy rate was at 90 per cent as of Monday, which he says is “as good as it’s been for quite some time.”

Over 200 COVID patients are in city hospitals with 29 in ICUs. The networks also transferred another four patients to other facilities across Ontario over the weekend equating to 31 over the last month.

HHS’ overall acute funded occupancy is at 110 per cent as of Monday, which includes the Juravinski at 107 per cent and the General at 126 per cent.

St. Joe’s is caring for about 60 COVID patients as of Monday with 13 in ICUs. 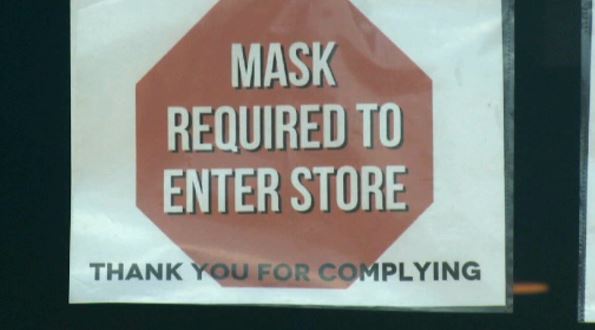 2:13How much longer will we be wearing masks?

St. Joseph’s Healthcare president Melissa Farrell said the number puts the agency’s ICU occupancy at over 100 per cent and creates a risk for new critically ill patients coming to the city’s hospitals.

“On average, we have 16 to 18 per cent of our acute medical and surgical beds that are held by patients … actually waiting for alternative levels of care in the community.”

MacIsaac says there’s been some relief in recent weeks with the onboarding of about 450 new staff and the number of workers self-isolating for COVID are now about 25 per cent of what they were at the peak of the Omicron wave.

The recent pressures have seen some patients parked in “unconventional spots,” like hallways and in some unfunded beds but the president said they generally have been able to use conventional spots to create other spaces.

“People do end up in unconventional spaces, but we try very hard to avoid it throughout the rest of the hospital to the extent possible,” said MacIssac.

“But the truth of the matter is, things have been less than ideal.”

Farrell said something similar is happening at St. Joe’s with occurrences where patients have been placed in “not ideal spaces” under normal circumstances.

The recent ramp down in surgical procedures has helped with opening up more spaces for those in dire need and in manpower allowing for the redeployment of staffers.

“This is why we also reduced the hours at out (east end) urgent care center, it was for us to pull these highly skilled resources into the ICU and onto our medicine platform to and into the EDs,” Farrell said.

Farrell says St. Joe’s as of Monday is operating at their threshold of 64 per cent of overall surgical activity to maintain access to urgent and emergent care.

As of last week, HHS reported it was at 53 per cent of pre-pandemic volumes — below the minimum rate of 75 per cent.

MacIssac said at present, the network is “barely meeting” requirements of performing urgent and emergent surgeries.

“Just to be clear … the surgeries that are getting deferred, these are not cosmetic surgeries,” MacIsaac said.

“These are these are very important procedures and there is a real toll on human suffering.”

Hamilton recorded its 500th COVID-19 death amid the ongoing pandemic on Monday, reporting another seven deaths over the weekend.

Despite the new fatalities, the city’s seven-day average death rate continued to drop week over week, moving to 1.29 per day from the 2.14 per day public health reported on Jan. 31.

More than half of nine deaths recorded since Friday, six, are tied to people over the age of 80. The remaining three are two in their 70s and one person in the 60s.

39 confirmed institutional outbreaks in Hamilton, 18 in facilities with seniors

Hamilton’s director of epidemiology says the recent surge in COVID outbreaks in the city’s retirement and long-term care homes (LTCH) was generally the result of the high incidence rate of Omicron which gave rise to continuous exposures.

Public health’s Michelle Baird said recent case studies in the Omicron wave showed some individuals tied to the homes had to go back in isolation multiple times, since the quarantine rules at the time were in 10-day increments.

“New guidance from the ministry does allow for a little more flexibility with respect to isolation periods and using testing to sort of shorten that duration up,” Baird said of an improving situation as of Monday.

“So I think that we’re seeing a bit of reprieve now, but I would say through December and into January, that was certainly a challenge we were experiencing with ongoing exposure.”

Despite the exposures, both HHS’ MacIsaac and St. Joe’s Farrell remarked they have been able generally avoid a surge in admissions compared to previous waves due to a better relationship in recent times.

“I think one of the success stories in this wave of the pandemic has actually been a credit to the long term care facilities,” Farrell said.

“That they’ve been able to manage the outbreaks, manage the situation, manage patient residents in long term care directly.”

Public health data revealed about 600 of those are tied to 11 long-term care homes (LTCH) with outbreaks.

The city’s retirement homes account for just over 100 cases from seven surges.

Five LTCHs combined make up just over 400 of the cases in homes, with Heritage Green in Stoney Creek having 115 reported cases.

More than half of all cases in homes with seniors are residents, about 300 are workers.

Public health data revealed that just under 1,100 cases are connected to the city’s 39 confirmed institutional outbreaks.

There are just over 230 reported COVID cases in seven Hamilton shelter outbreaks as of Monday.

City hospitals have seven outbreaks with only 37 cases associated with surges — 30 with patients.

Centre on Barton vaccine clinic to close on Sunday

Hamilton’s mass COVID-19 vaccination clinic at the Centre on Barton is set to close end of day on Sunday.

Baird said the move is in keeping with a strategy to bring doses “to where people are” through “pop-up” and mobile clincs.

“We’re renewing our efforts and focusing on neighbourhoods with lower coverage rates, with vaccine coverage estimates and other local data,” Baird said.

The clinic opened in November and to date has vaccinated over 65,000 residents, administering upwards of 2,700 vaccines per day. However, doses administered per day have dropped to an average of about 170 per day in the last seven days.

Staff will now be redeployed to the mobile clinics including school-based ventures and the Mountain clinic at Lime Ridge Mall.

Close to 82.3 per cent of eligible Hamiltonians aged five and up have had a pair of doses, while 86.8 per cent have gotten at least one shot.

About 87.4 per cent of residents aged 12-plus have had at least two shots, while about 89.9 per cent have had a first dose.

The city is still behind the provincial average, which has 89.5 per cent of those 12-plus with two doses and 92.1 per cent with a single dose.

Excluding kids aged five to 11, Hamiltonians in the 12-to-17 age group represent the lowest vaccination rates of those eligible in all communities.

Hamilton is also slightly behind the provincial average in first doses for those aged 5 to 11 — 50 per cent compared to Ontario’s 54.4 per cent.

The city is on par with second doses in the age group at 22 per cent compared to the province’s 23.8 per cent.