Police gather in Windsor ahead of potential operation to clear Ambassador Bridge: sources

Police gather in Windsor ahead of potential operation to clear Ambassador Bridge: sources

Police resources are being poured into Windsor, Ont. to prepare for a potential operation to clear the blockade at the Ambassador Bridge, multiple sources have told Global News.

The development comes in the wake of Premier Doug Ford declaring a state of emergency in Ontario.

Protestors first blocked the Ambassador Bridge on Monday, disrupting cross-border traffic at one of the busiest land border crossings in Canada. The blockade is now on its fifth straight day, and demonstrators have dug in.

Ford promised Friday he will “urgently enact orders that will make crystal clear it is illegal and punishable to block and impede the movement of goods, people and services along critical infrastructure.”

Non-compliance will hold a hefty punishment, Ford warned, with a maximum penalty of $100,000 and up to a year of jail time. 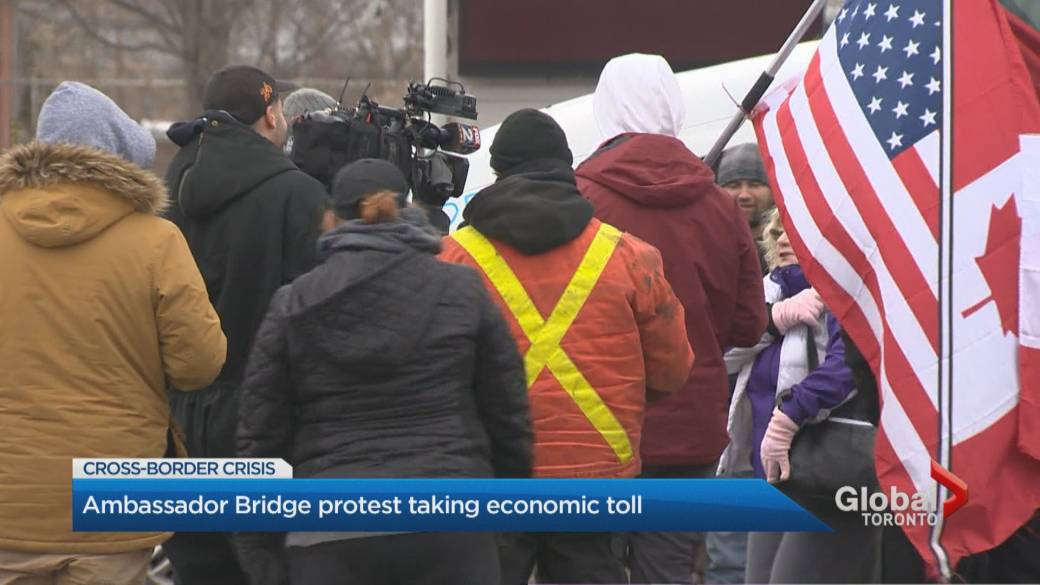 “The government of Canada will be ready to do whatever we can to support local and provincial law enforcement authorities to make sure that these illegal activities come to a conclusion quickly,” LeBlanc said.

As the blockade continues, supply chains are starting to feel the heat. The Ambassador Bridge is responsible for $350 million to $400 million worth of goods every single day, according to Fraser Johnson, professor of operations management at the Ivey Business School.

The automotive sector is seeing an impact on its operations, too. Toyota, General Motors, and Ford all reported slowdowns or cancelled shifts on Thursday as the blockade continued.

The Automotive Parts Manufacturers’ Association, meanwhile, has applied for an injunction that would bar protesters from blocking the Ambassador Bridge border crossing. The City of Windsor was granted intervenor status in the application, which is set to be heard on Friday.

The protest is one of several demonstrations happening in the country relating to COVID-19 measures. In Ottawa, a protest which organizers have dubbed a “freedom convoy” has been clogging downtown city streets for nearly two weeks.

Speaking Friday, Ford called the situation in Ottawa a “siege.”

“I call it a siege because that is what it is. It’s an illegal occupation,” Ford said.

“This is no longer a protest. With a protest, you peacefully make your point and you go back home.”